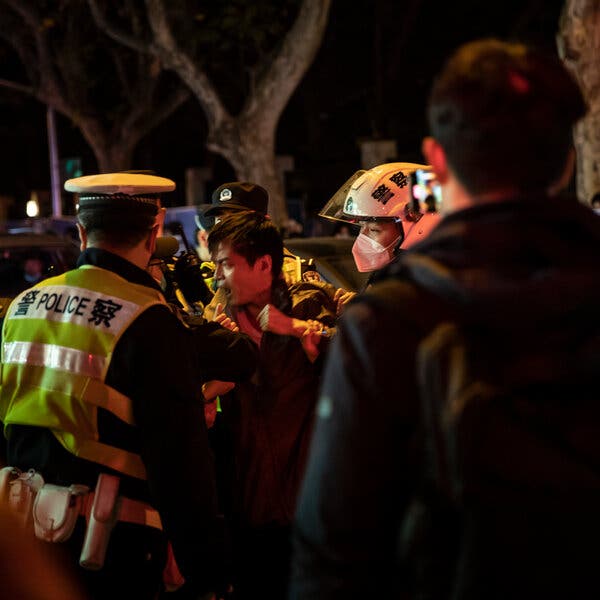 Police officers at a protest in Shanghai on Sunday.Credit…The New York Times

China tries to snuff out protests

Amid the most widespread protests in decades, China’s government is mobilizing on several fronts to quash dissent, drawing on its tool kit of repression and surveillance. By the end of Tuesday, the demonstrations already appeared to be smaller and more scattered. Here’s what videos show about what demonstrators want — and the risks.

The campaign is being carried out by the security apparatus built by Xi Jinping, the country’s leader. In pursuit of unshakable dominance, he has expanded police forces, promoted loyal security leaders and declared that “political security” must be the bedrock of national security.

At the same time as it was imposing a clampdown, the government announced that it would step up vaccinations of older adults. That move is deemed crucial to easing China’s tight Covid controls, which have fueled public anger — signaling that as Beijing suppresses dissent, it is also moving to address the problem underlying the protests.

Details: Public security personnel and vehicles have blanketed potential protest sites. Police officers are searching some residents’ phones for prohibited apps. Officials are going to the homes of would-be protesters to warn them against illegal activities and are taking some away for questioning. Censors are scrubbing protest symbols and slogans from social media.

Analysis: “They’re saying as little as possible for as long as possible,” William Hurst, a professor at the University of Cambridge who studies politics and protest in China, said of the country’s leaders. “If they speak, it could inflame the situation, so it’s better to sit back and pretend nothing is happening.”

Damage to an electrical substation in central Ukraine.Credit…Brendan Hoffman for The New York Times

As Ukraine faces the prospect of a winter without heat, American officials pledged yesterday to give Ukraine $53 million to repair an electrical grid crippled by relentless Russian airstrikes and sought to rally other allies to make similar offers. The money is to be used to buy equipment like distribution transformers and circuit breakers, the State Department said.

On the first day of a two-day NATO summit in Bucharest, Romania, officials considered how best to support Ukraine in its reconstruction, as well as how to better protect the NATO member nations closest to Ukraine from any potential spillover from the conflict. Separately, the secretary general stressed that the alliance might one day expand to include Ukraine.

American and European officials say Moscow is trying to break the morale of Ukrainians by depriving them of basic utilities over the winter. It embraced the tactic after the Russian military began experiencing major setbacks in recent months, including being forced to retreat from the southern city of Kherson and the Kharkiv region in the northeast.

Context: NATO countries have so far provided about $40 billion in weaponry to Ukraine, roughly the size of France’s annual defense budget. But Ukraine has been tearing through stockpiles, setting off a scramble to supply the country with what it needs while also replenishing NATO members’ own arsenals.

In other news from the war:

Shopping in Rostock, Germany. The country’s rate of inflation slipped in November.Credit…Laetitia Vancon for The New York Times

Price gains in Germany and Spain cooled in November, after months of climbing steadily, as lower energy prices helped to ease the pressure on consumers and businesses in two of Europe’s largest economies. In Germany, the annual rate of inflation dropped to 11.3 percent from 11.6 percent, while in Spain the rate fell to 6.6 percent from 7.3 percent in October.

But even as signals pointed to easing inflation, Christine Lagarde, the president of the European Central Bank, said that she did not believe that inflation had peaked in the 19 countries that use the euro as their currency. Consumer prices across the eurozone jumped in October by a record annual rate of 10.7 percent. The latest data will be released today.

Inflation has lately eased slightly in many countries around the world, including Singapore, Belgium and Australia. But concerns about a global recession persist amid a growing scarcity of food and the threats of oil shock and financial crisis. A strong U.S. dollar has worsened the debt burdens of developing economies, increasing the chances of government defaults.

Shrinkflation: Meet the man on a mission to expose sneaky manipulation of products or packaging that leaves consumers with less for their money.

News From the U.S.

In The Times Magazine, the playwright Tom Stoppard, 85, talks to David Marchese about a rising tide of antisemitism, how to approach hate speech, and his newest play, “Leopoldstadt.”

“I’m always interested in who I am and why,” he says. “What I’m writing about, as a dramatist or writer of fiction, is something that happens in parallel to that.”

Breaking down the brilliance of Kylian Mbappé: The flick, the dink, the clever header, the calm sidefoot — France’s Mbappé can do it all, and Alan Shearer explains how.

Did Ronaldo score against Uruguay?: The Portugal star seemed to score his nation’s first goal against Uruguay — he celebrated as though he had — but Bruno Fernandes got the credit.

U.S. vs. Iran: The star Christian Pulisic scored the only goal in the Americans’ winner-takes-all matchup yesterday but had to exit after getting hurt on the play. A tense but scoreless second half meant the U.S. was into the knockout stage.

Where is Isabel dos Santos?

The Angolan authorities have asked Interpol for help to track down Isabel dos Santos, the daughter of Angola’s former president, who was once considered Africa’s richest woman. An effort to arrest her comes after years of investigations into the enormous fortune she amassed while her father, José Eduardo dos Santos held office. He died in July.

The authorities have said they plan to charge her with economic crimes linked to her tenure as the head of the state-owned oil company. With a net worth once estimated at $3.5 billion, dos Santos became the face of corruption in Angola after her father stepped down in 2017.

The Angolan authorities say letters sent to her homes in the Netherlands, Britain and the United Arab Emirates have all gone unanswered. “My address is known, my whereabouts are known,” dos Santos told The Times this month. She labeled the investigation “political persecution” and accused the Angolan courts of bias.

“I’m not a fugitive,” said dos Santos, who regularly posts on Instagram. “I’m not hiding from anyone.” Many of her assets across the world, including those in Portugal and the Netherlands, have been frozen because of the corruption accusations hanging over her. — Lynsey Chutel, a Briefings writer in Johannesburg

The Times Book Review chooses the year’s 10 best works of fiction and nonfiction.

What to Listen to

Anderson Cooper explores grief in “All There Is,” a new, deeply personal podcast about his family.

Here’s today’s Mini Crossword, and a clue: What cubes have that squares lack (five letters).

That’s it for today’s briefing. See you tomorrow. — Natasha

“The Daily” is on a campaign to influence the Supreme Court.

Reach Natasha and the team at [email protected].

Tags
All Off That Time Ukraine

Destined for the Dump, Construction Waste Gets New Life in the Garden

‘Is He for Real?’: Warnock Hits Walker in New Ad, but Lets Others Do the Talking