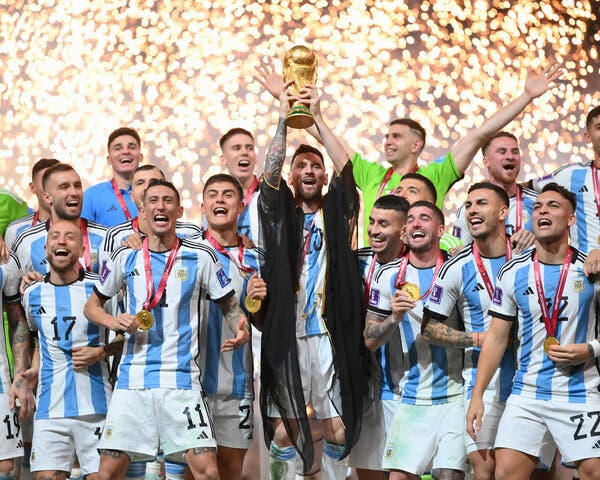 It was the most extraordinary World Cup final in history. And Lionel Messi, who played a career-defining game, is at the center of Argentina’s victory.

Messi, 35, cemented his claim to be the greatest player to have ever played the game. In what he has said would be his last World Cup game — and his first-ever World Cup victory — Messi scored two of the team’s three goals as well as the first goal in the team’s penalty shootouts.

Argentina scored two goals in the first half, as France seemed slack and uncertain. Then, Kylian Mbappé surged forward. In the space of under two minutes, he scored back-to-back second-half goals, tying the game.

In extra time, Messi scored his second goal of the game: 3-2, Argentina. Then, Mbappé scored on a penalty kick to tie the game at 3-3. The teams went to a shootout. Argentina won on penalties, 4-2, as the stadium crowd burst into tears of joy and grief.

Mbappé: The 23-year-old French superstar is the first man since 1966 to score three goals in a World Cup final. He won the Golden Boot, which goes to the tournament’s top scorer.

Messi: He left Argentina at 13 and has lived in the shadow of Diego Maradona, who last hoisted the World Cup trophy for Argentina 36 years ago. Now, the country has unequivocally embraced its native son. He won the Golden Ball, as the tournament’s best player.

Russia’s invasion plans showed that it was expecting to overrun Kyiv within hours of invading Ukraine.Credit…operativnoZSU, via Telegram

How Russia fumbled the war

My colleagues have published a sweeping account of how Russia mismanaged its invasion of Ukraine, based on battle plans, intercepts and interviews with Russian soldiers and Kremlin confidants. Here are some major points:

Read the piece in full.

For more: “It was a cascade of failures, and at the top is Putin’s own misguidedness, his own isolation and his own conviction that he knew what was best,” Anton Troianovski, the Moscow bureau chief, told The Morning newsletter.

Yesterday’s launches were North Korea’s first missile tests since it fired an ICBM a month ago.Credit…Shin Jun-Hee/YONHAP, via Associated Press

North Korea fired two medium-range ballistic missiles yesterday, which could potentially reach Japan. The missiles fell into the waters between the two countries.

The launches came just days after Japan vowed to ​double its military spending to help guard against the growing threats from China and North Korea. Future conflicts ​over the Korean Peninsula and Taiwan could involve ​Japan.

The new plans called for Japan, which has long been officially pacifist, to acquire​ counterstrike abilities, including​ missiles that could be used to target bases in enemy territory in response to an attack.

Context: North Korea fired missiles that flew over Japan in 2017 and again in October.

Background: Last week, North Korea tested​ a ​powerful new engine for an intercontinental ballistic missile​, as part of its effort to switch from liquid to solid fuel, which could make missiles easier to transport and faster to launch​.

Markets: The growing consensus about the emergence of a new era of superpower confrontation is boosting arms makers.

We may be in a new epoch in Earth’s history: the Anthropocene, the age of humans.

“If you were around in 1920, your attitude would have been, ‘Nature’s too big for humans to influence,’ ” said the chair of a panel of scientists, which has spent more than a decade deliberating whether we are in a new epoch.

The past century has upended that thinking, he said. “It’s been a shock event, a bit like an asteroid hitting the planet.”

Pradeep Sahil, a poet and lyricist, drew an appreciative crowd with his recitation.Credit…Saumya Khandelwal for The New York Times

For centuries, Urdu was a prominent language of culture and poetry in India. Its literature and journalism — often advanced by writers who rebelled against religious dogma — played important roles in the country’s independence struggle against British colonial rule and in the spread of socialist fervor later in the 20th century.

But in more recent decades, the language has faced dual threats from politics and the quest for economic prosperity. Urdu — a language spoken widely in Pakistan, India’s archrival — is now stigmatized as foreign. Parents increasingly enroll their children in schools that teach English or other Indian languages better suited for the job market.

Still, more than 300,000 people celebrated Urdu verse during a three-day festival in New Delhi this month. The gathering, the Jashn-e-Rekhta poetry festival, was a testament to Urdu’s staying power as the key language of romantic expression in India’s songs and films, which draw heavily on Urdu poetry.

For more: Mujib Mashal, my colleague, shared videos of one of his favorite moments from the festival on Twitter.

For a holiday main, check out this rosy, crusted roasted beef tenderloin.

For some last-minute holiday shopping, here are nine new books our editors recommend, with stories from Iceland and Nigeria to Tokyo and outer space.

“The Super 8 Years” collects the memories of Annie Ernaux, the French writer who won the Nobel Prize in Literature this year.

He was married. She was looking for adventure. It somehow all worked out.

Can you recognize these newsmakers of 2022?

Play the Mini Crossword, and a clue: Large in scope (five letters).

Here are the Wordle and the Spelling Bee.

That’s it for today’s briefing. Have a lovely week! See you tomorrow. — Amelia

Start your week with this narrated long read about two Chinese immigrants in New York City. And here’s Friday’s edition of “The Daily,” on A.I. Or check out “Hard Fork,” where our hosts make their tech predictions for 2023.

Email us at [email protected] with any questions or concerns.

Tags
New Russia That War Was

After Historic Comeback, Mbappé’s Quest to Be Considered the Best Becomes Longer