They were community organizers and unionists. Teenagers and pro-democracy activists.

Those who were detained under the dictatorship of Ferdinand E. Marcos in the Philippines numbered in the tens of thousands. The dictator declared martial law in the country 50 years ago on Wednesday, a grisly period when the opposition was imprisoned, tortured and killed.

The regime was toppled by peaceful pro-democracy protests in 1986, forcing the Marcoses into exile. The victims who survived those years were shocked when Ferdinand Marcos Jr., the dictator’s son and namesake, was elected president in May.

Mr. Marcos won a landslide victory after spending years trying to rehabilitate his family’s name and by appealing to Rodrigo Duterte’s many supporters, even putting the former president’s daughter on the ticket.

Though Mr. Marcos has asked not to be judged by his father’s actions and insisted that his opponents have attacked his family unfairly, critics worry he will continue the culture of impunity that flourished under his father and Mr. Duterte. The Marcos family has never apologized, though some victims have received reparations from the government.

With the Marcoses back in the presidential palace, some survivors of martial law fear their stories will be lost. Here are nine of them. 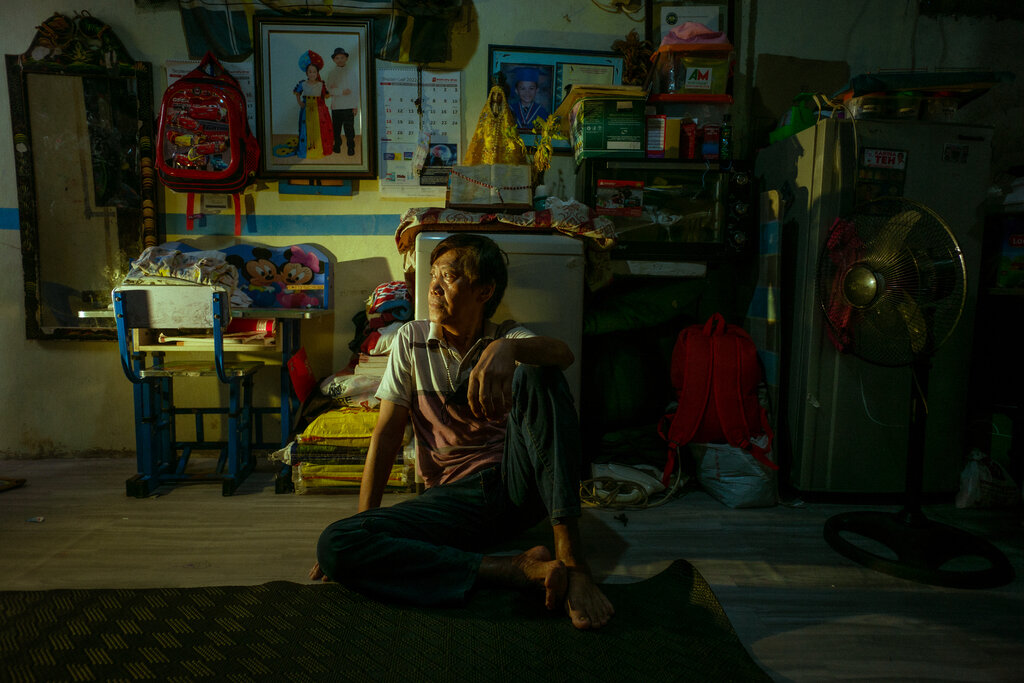 “I will continue fighting for what is right, while I still have the strength.”

Cecilio Bejer, a labor activist, was detained twice during the martial law years. The first time was in 1972, when he worked as a machine operator at a rubber factory. “All the menfolk, 12 years old and up, were told to go outside, no one was spared,” he said.The authorities separated the workers who had tattoos or long hair from those who didn’t. After the men were searched and interrogated, they were let go, Mr. Bejer said.

When the factory shut down in the mid-1970s, Mr. Bejer became a full-time activist. In 1980, he was arrested again and taken to prison after the military claimed he was making anti-government posters. The guards accused him of being a protest leader, kicking and beating him. He was later transferred to a facility for political prisoners and held there from July to December of 1980. “Was it all a waste?” he said. “I feel that there is no change at all. But I will continue fighting for what is right, while I still have the strength.” 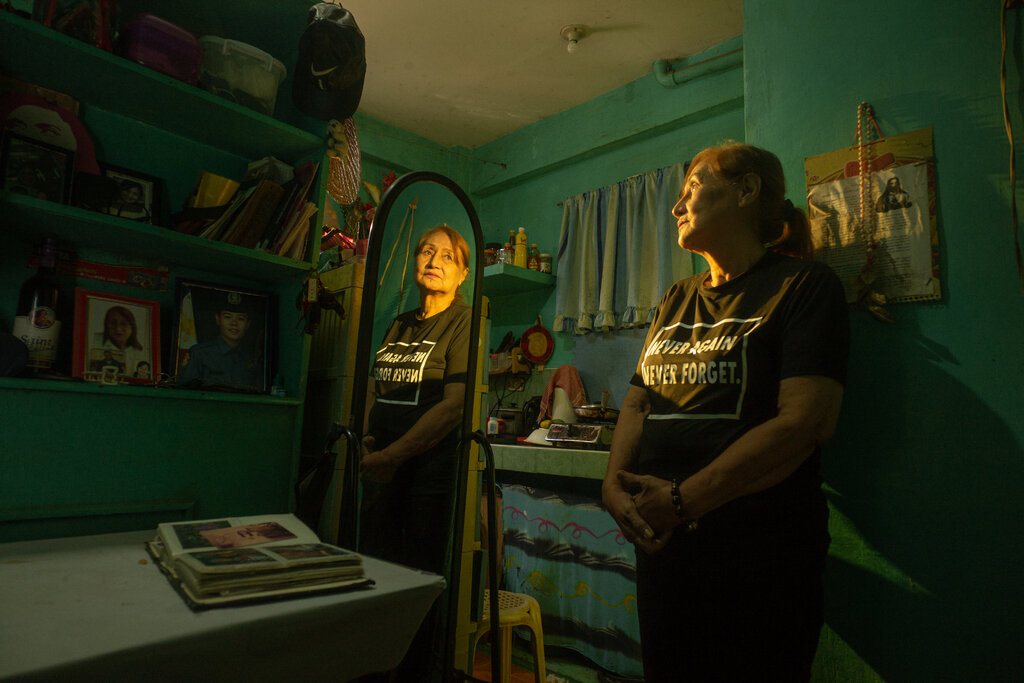 “Those of us who can testify that Marcos committed sins are still alive.”

While working on behalf of the residents of Tatalon, a poor, urban community outside Manila, Carmencita Florentino was arrested twice, first in 1977, and then again the following year. “There were more or less 500 of us in jail,” said Ms. Florentino. She said some of her cellmates were tortured and molested.

“I am afraid of the Marcoses now that they are back in power. Those of us who can testify that Marcos committed sins are still alive,” she said. She blamed Ferdinand E. Marcos and his regime for her suffering. “If he did not ruin our future, he may have earned our respect,” she said. Ms. Florentino said she now lives in a home that is as small as the prison cell she was once held in. 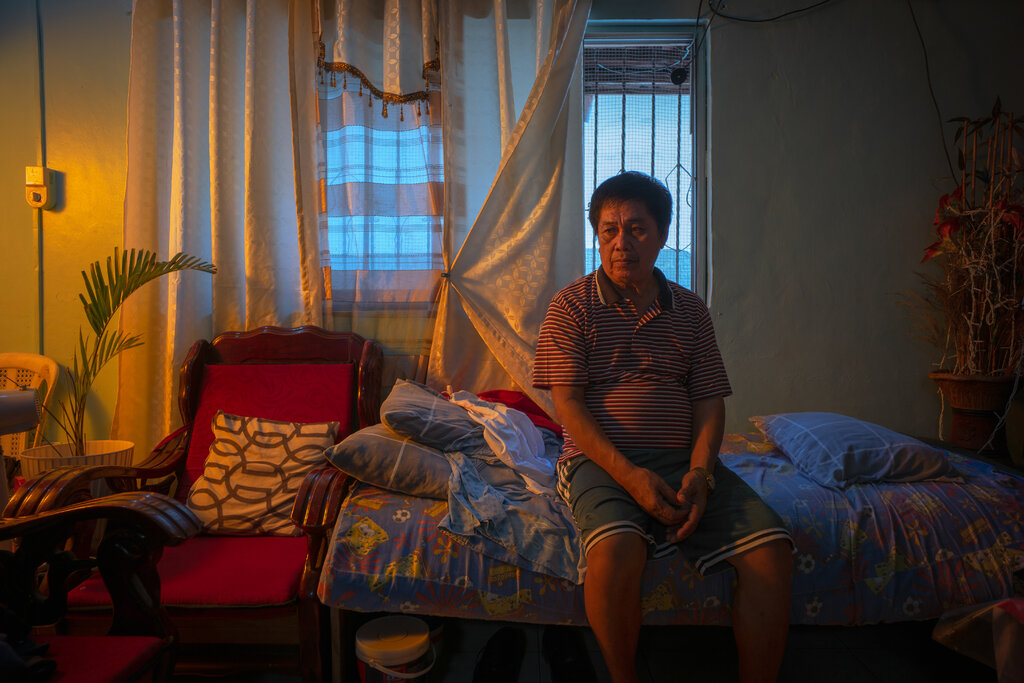 “They can try to change history, but they can’t.”

Pedrito Cipriano, a dock worker in the 1970s, was an active union organizer. One of the rallies he attended was broken up by Marcos forces. Mr. Cipriano said he was detained, beaten and tortured before being freed a few months later. He is among the many Filipinos who accuse the Marcos family of siphoning billions of dollars from the government when they held power decades ago. “Not just Marcos Jr., but the entire Marcos family benefited from the stolen wealth,” he said, his voice frail.

Mr. Cipriano remains active in community organizing. Many young people have no memory of martial law, and an older generation of Filipinos fear the Marcos family has glossed over the brutality of the dictatorship. “What happened before was true,” Mr. Cipriano said. “They can try to change history, but they can’t.” 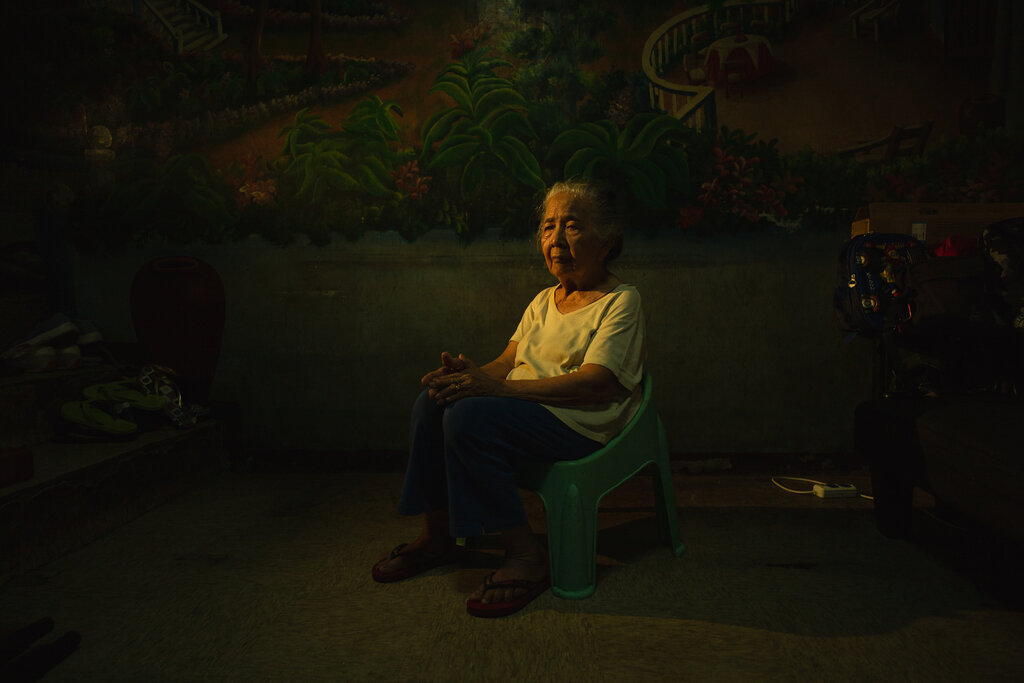 “It was right to defend your country, the Philippines. What else was I supposed to do?”

A timid, soft-spoken grandmother with a steely resolve, Silvestra Mendoza was part of a civic group led by mothers focused on helping the urban poor. She was accused of being a subversive and held in detention for weeks in 1977. “I was accused of violating 1081,” Ms. Mendoza said, referring to the presidential proclamation that placed the Philippines under military rule.

In jail, she struggled to maintain her composure because she knew she did nothing wrong. “You should not be afraid. It was right to defend your country, the Philippines. What else was I supposed to do?” she said. Now she feels that many Filipinos have squandered the gains of the peaceful, pro-democracy protests that toppled the Marcos regime. She laughed at Mr. Marcos’s suggestion that the elder Marcos was innocent. “Weren’t they with his father when he was kicked out of the country?” she said. 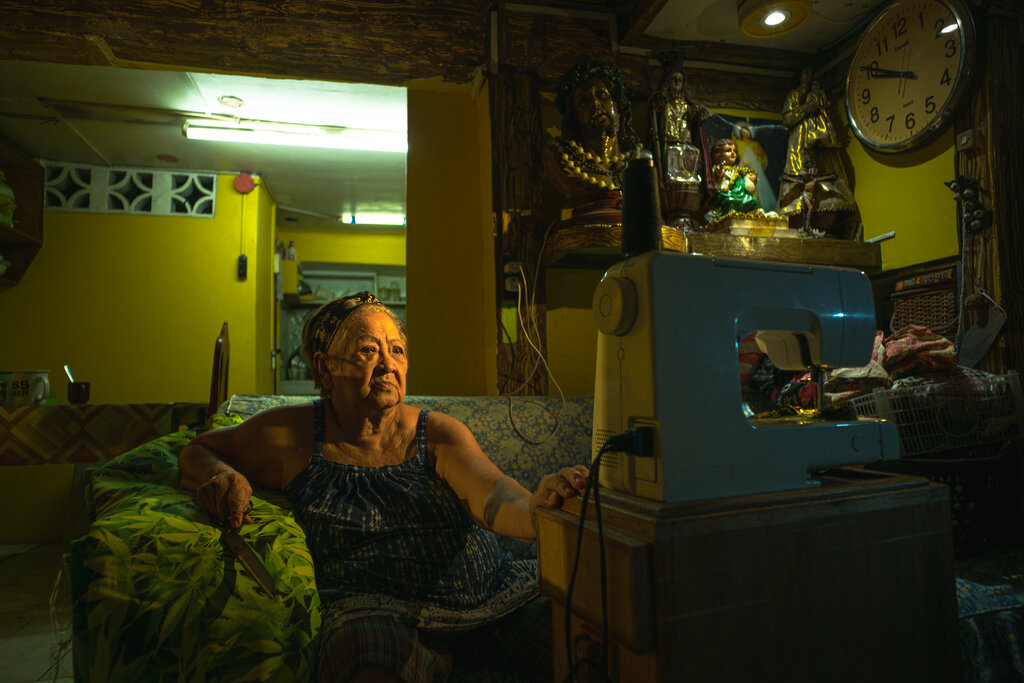 “I did not know why I was in jail or why I was called a subversive.”

The police officer who arrested Loretta Sipagan was the husband of a friend. Ms. Sipagan was a community organizer in a slum neighborhood in the 1970s. She said she was fighting for better homes, not lofty ideals like democracy and human rights. Still, she spent two months and 10 days in prison. While in detention, she worked on growing her network of activists.

“I was in jail with other political detainees. I did not know why I was in jail or why I was called a subversive. We just had an organization working for the common good,” she said. She recalled being reunited with the arresting officer years later. He apologized and said he was just doing his job. She said she bore him no ill will, and even thanked him for opening her eyes to the reality of martial law. 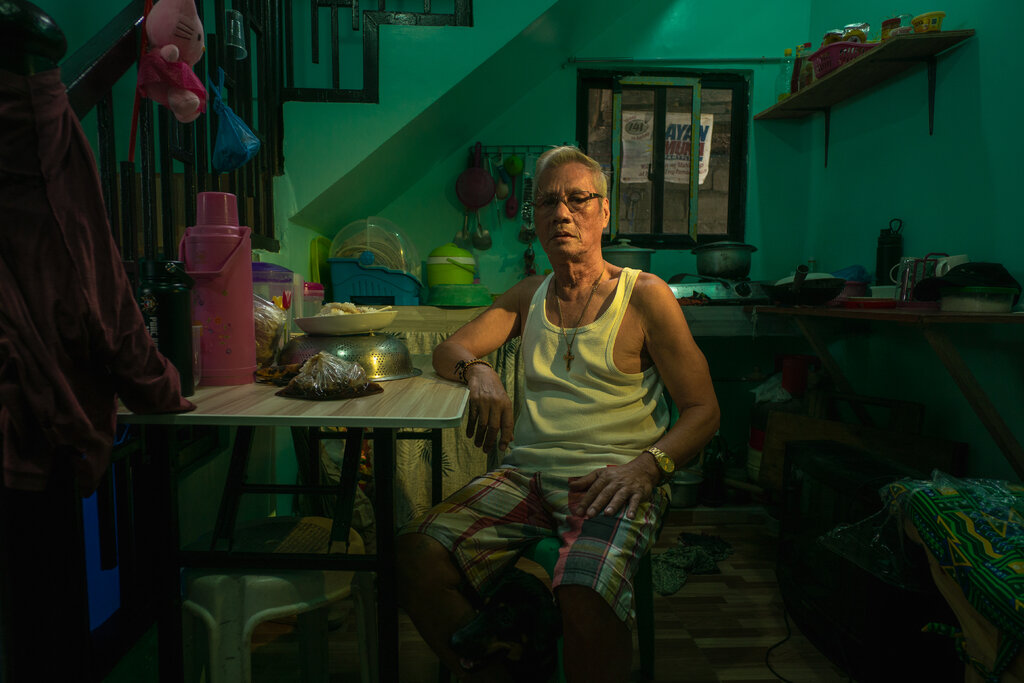 “President Marcos may be worse than his father.”

When he was in his 20s, Romeo Fortez Mendoza was part of a youth group that often faced down the police and military forces during protests. He was nabbed by the authorities in 1978 while protesting the regime’s planned demolition of homes.

“Nothing has changed,” he said, referring to the Marcos family’s return to power. “President Marcos may be worse than his father.” The weathered activist said one of his daughters is now a police officer. “I tell her about martial law, about my suffering,” he said. But were he to run into his daughter at a protest, “I will just walk away.” 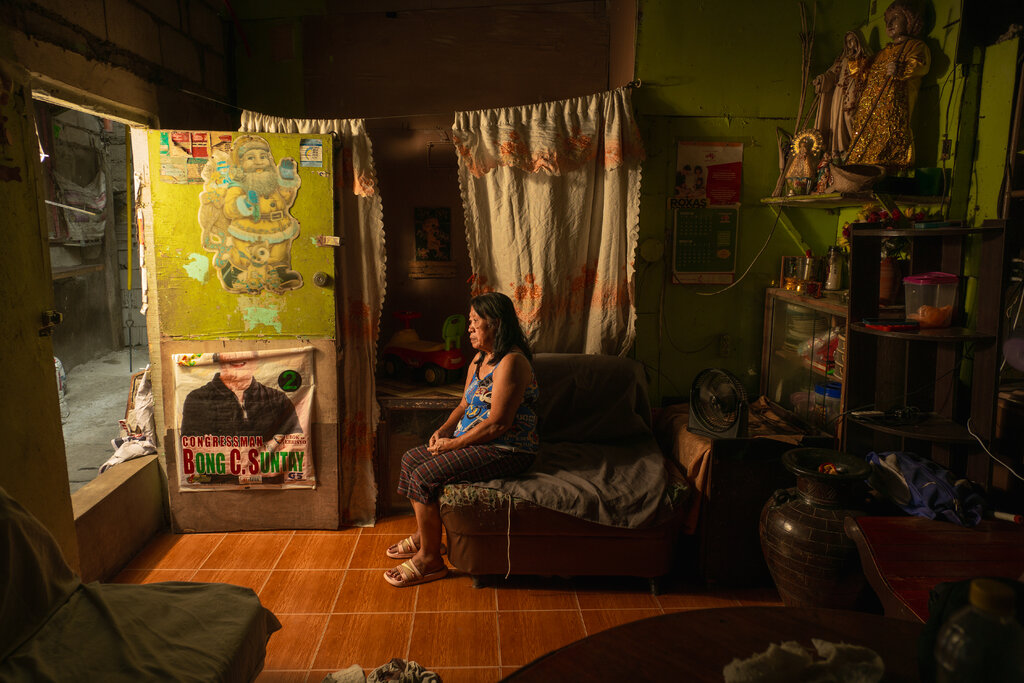 “I think that we are a hopeless case.”

Lydia Sanchez and her husband were taken by the authorities in 1973. She was let go after two days. Her husband, Nicolas, spent five months in jail, where he was regularly beaten. “They whacked him on the head until his ears bled, and then they submerged him in a toilet bowl” she said. “They were asking him about something that he knew nothing about.”

Despite being arrested, the couple never stopped their activism on behalf of the poor. They were forced to move from place to place. When the Marcos dictatorship fell in 1986, they were among the first to storm the presidential palace. “I was very happy. All of us who went there were crying,” she said. But now that the son is in power, she is angry. “We haven’t learned our lessons as a people,” she said. “I think that we are a hopeless case.” 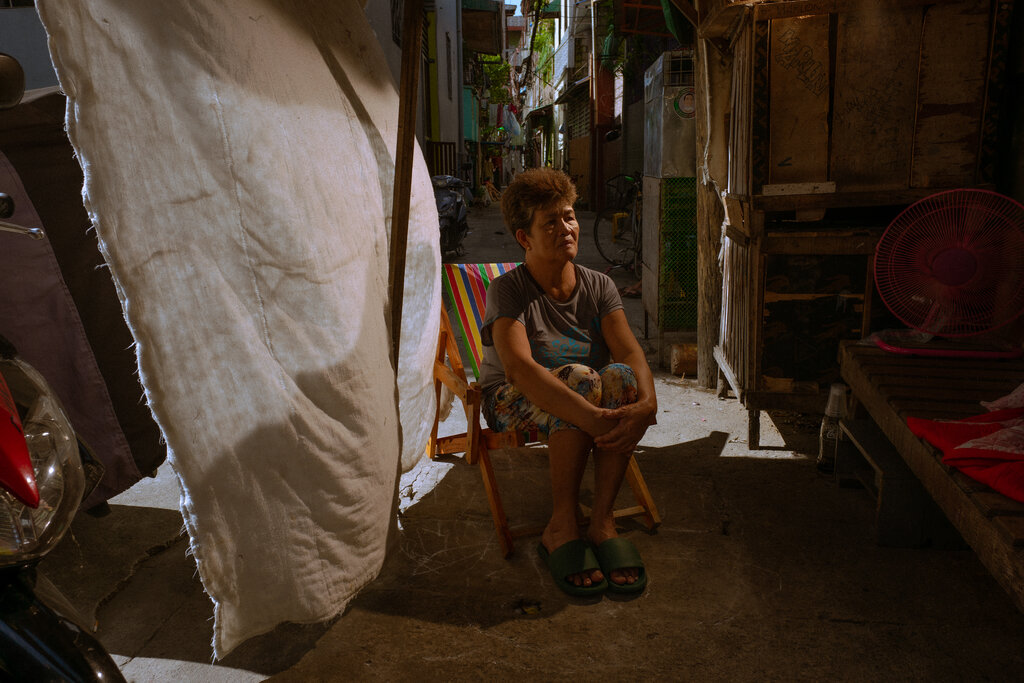 “They repeatedly hit me on the head. I cried and cried. They told me I would never be freed.”

Pacita Armada was living at her uncle’s house when the authorities arrived to carry out a raid. Her uncle was a unionist, and Ms. Armada said she was grabbed by the hair, dragged outside and taken to the police station with about a dozen other people. She was only 16.

“They forced me to say something about my uncle’s activities. I told them I knew nothing. They repeatedly hit me on the head. I cried and cried,” she said. “They told me I would never be freed.” Ms. Armada was detained for four months, during which her father died. “I think he died because of me,” she said. “He was stressed out and suffered a heart attack and died.” 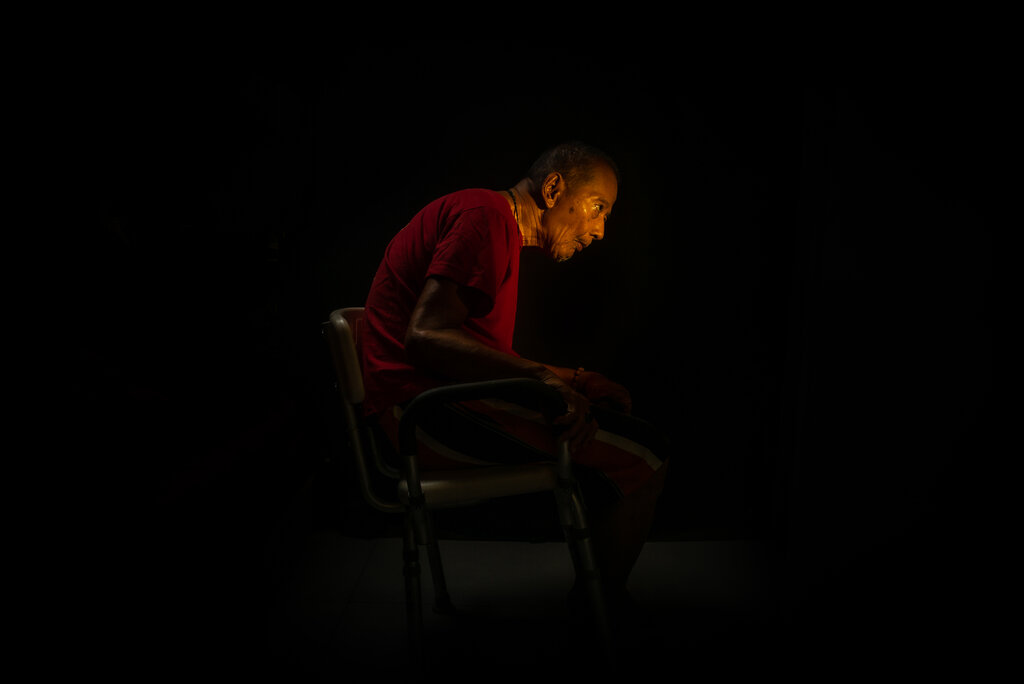 “The Marcoses can at least say sorry for what they did.”

George Obedosa has Parkinson’s disease. His back is bent, but he attributes his posture to the torture he endured during detention under the Marcos dictatorship. “The Marcoses can at least say sorry for what they did,” Mr. Obedosa said of his two years in detention. He was arrested in the central province of Samar in 1972, the year martial law was declared in the Philippines. 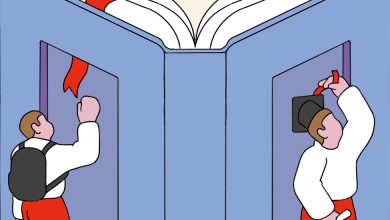