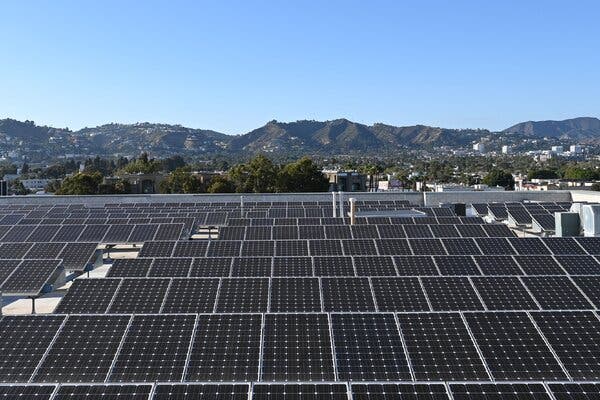 California is the nation’s biggest solar market, so the change could harm the growing renewable energy business and have ramifications across the country. Debates about how far states should go to encourage the use of renewable energy have already been simmering nationwide because of the severity of the climate crisis.

My colleague Ivan Penn has been covering many of these issues as a business reporter focused on alternative energy. Ivan is based in Los Angeles, where energy issues are always front of mind.

I spoke with Ivan about the debate over the rooftop solar payments and some of the other big stories on his beat this year, including Gov. Gavin Newsom’s surprising push to keep California’s last nuclear plant open and how the state managed to avoid blackouts during a historic heat wave this summer. Here’s our conversation, lightly edited:

So what’s going on with rooftop solar?

California is the leader in the country when it comes to rooftop solar, driven by the Million Solar Roofs program that former Gov. Arnold Schwarzenegger pushed. We have 1.5 million rooftop solar installations in the state. Now, how do you compensate rooftop solar owners?

What they’re currently being compensated for is the excess electricity that their systems produce and send to the grid. I think most people agree that they should be compensated something, but the question is how much. Because if they’re not contributing to the cost of the grid, then that means those who don’t have solar systems and batteries are paying a larger share of the cost of the grid. And critics argue that that puts more pressure on those who can least afford it. Those in disadvantaged communities would have to contribute more of their income for electricity to cover the costs.

Regulators voted on Thursday to reduce the payments starting in April. What potential impacts will you be watching for next year?

Whether the drop in compensation slows rooftop solar growth, and what does that mean for consumers. Maybe it hastens consumers’ decision to buy batteries. Does that increase the battery market? It’s going to change things dramatically.

Let’s talk about heat waves. There have been awful ones in the past few years, and that feels like a driving force for many of California’s energy conversations.

Climate change is affecting us in many different ways. And, of course, this year we had this enormous heat dome over the entire West. California, with its large population and outsize needs, also had outsize demand. So we got to a place where we had demand levels that were the highest that we had seen, and that put a lot of pressure on the system.

Related to that have been some pushes by the governor and the regulators, the California Public Utilities Commission and the California Energy Commission, to ensure that there’s ample power to meet the demand that Californians have for electricity. Some of that led the governor to push for the extension of the life of the Diablo Canyon nuclear plant as the last nuclear facility within California.

What was your reaction to that decision from Newsom?

There was a lot of surprise because historically Democrats haven’t been the ones embracing the continuation of the life of existing nuclear plants. But because we’re dealing with the energy transition away from fossil fuels, everyone is looking at how we meet the increasing demand not only of today, but also of the future, as we increasingly electrify everything. (California this year announced a ban on gasoline-powered cars and committed to a plan to phase out gas-fueled furnaces and water heaters.)

And it’s not just Newsom. You’re getting this from President Biden and his administration, too. Of course, there’s still a concern about the waste and what you do with the waste. But the president and Governor Newsom see nuclear, even from the Democratic position, as a viable way of addressing our clean energy needs right now.

A remote camera photo of P-22 in 2013. The animal, which was euthanized on Saturday, had amassed more than 10,000 followers on Instagram.Credit…Steve Winter/National Geographic

If you read one story, make it this

P-22, the celebrity mountain lion of Los Angeles, was euthanized on Saturday.

Tell us: Share your thoughts and memories of P-22. Email us at [email protected]

Hundreds of University of California graduate workers and supporters rallied outside the State Capitol in Sacramento this month to decry the university’s treatment of students and employees.Credit…Brontë Wittpenn/San Francisco Chronicle, via Associated Press

Tell us about your favorite places to visit in California. Email your suggestions to [email protected] We’ll be sharing more in upcoming editions of the newsletter.

Andrea LeGrace Mingo and Danielle Robinson have known each other since 2004, when they were 15 and competing in the trials for the under-16 U.S.A. National Team in women’s basketball.

Mingo was friendly with everyone. Robinson was all business.

The two became good friends anyway. They stayed in contact through high school and saw each other on the road at various travel basketball tournaments. Mingo played for Marist School in Atlanta, while Robinson was on the team at Archbishop Mitty High School in San Jose.

Twelve years later, in 2016, they went on their first date. “I realized that I was in love with Danielle when I felt safe to tell her all my deepest, darkest secrets,” Mingo said. “She became the friend I didn’t want to go anywhere without. If there was one person I wanted to share an experience with, it was always her.”

Six years after that first date, the two got married in front of 150 friends and family last month.

Read their full love story in The Times.

Thanks for reading. I’ll be back tomorrow. — Soumya

Briana Scalia contributed to California Today. You can reach the team at [email protected].

Tags
California New That Was With