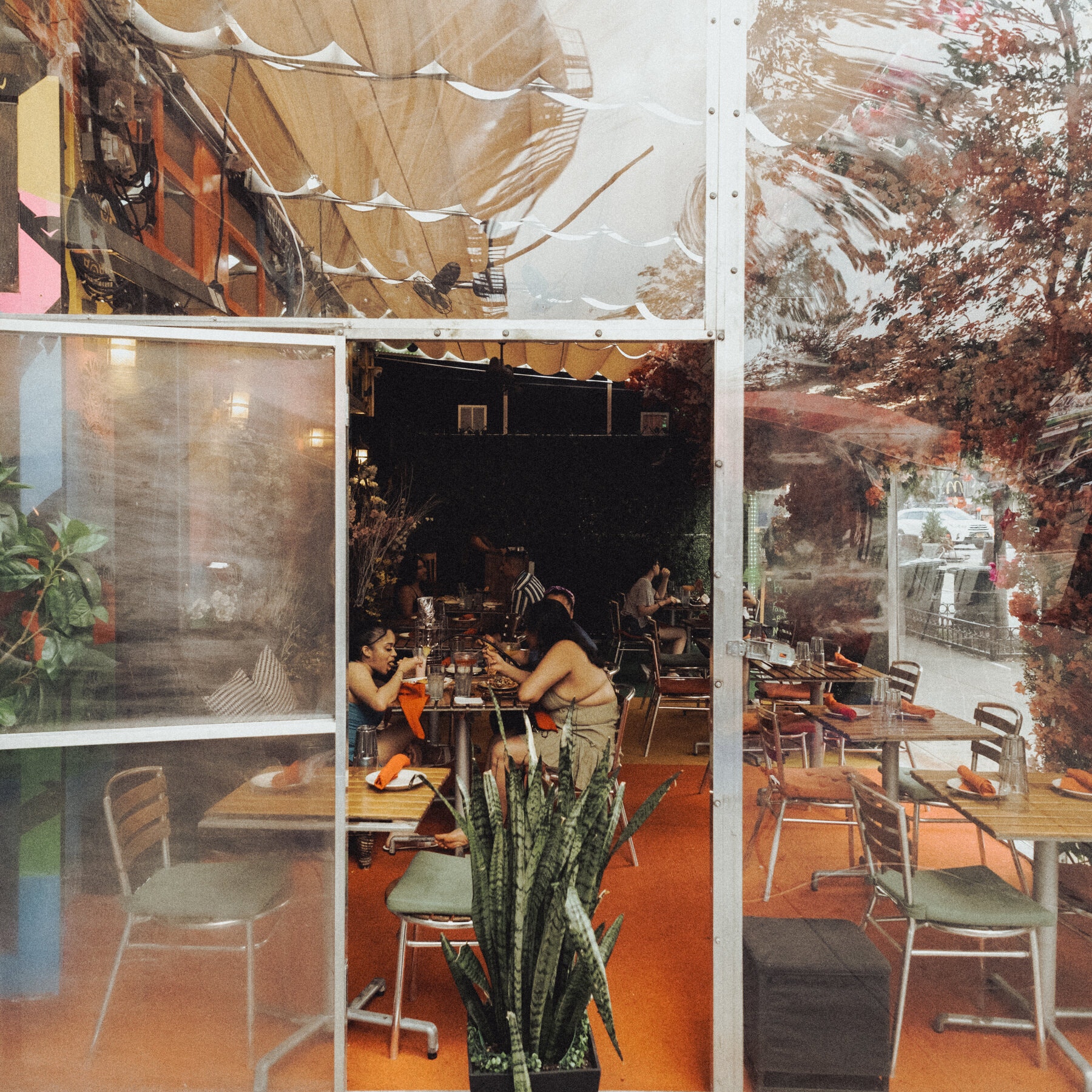 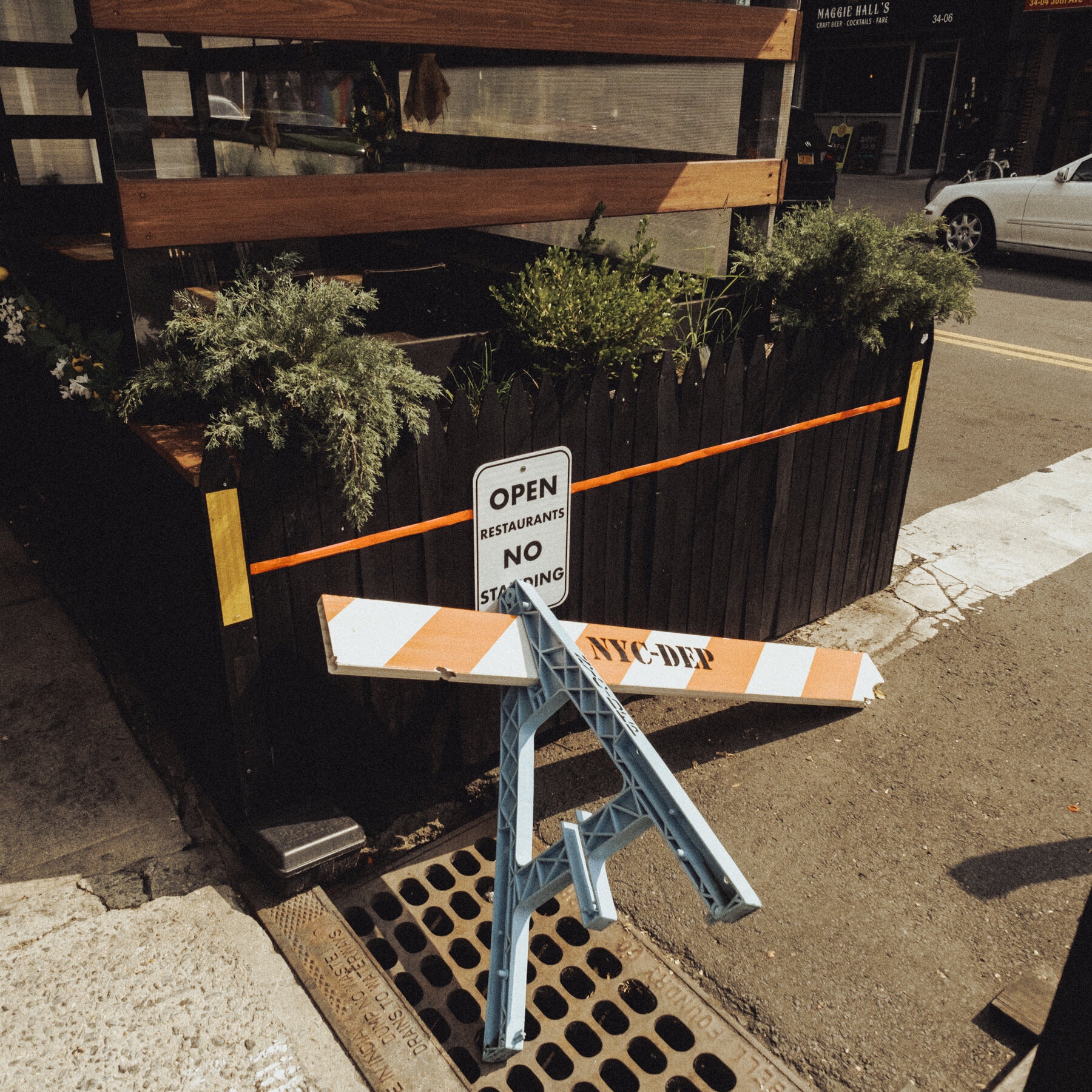 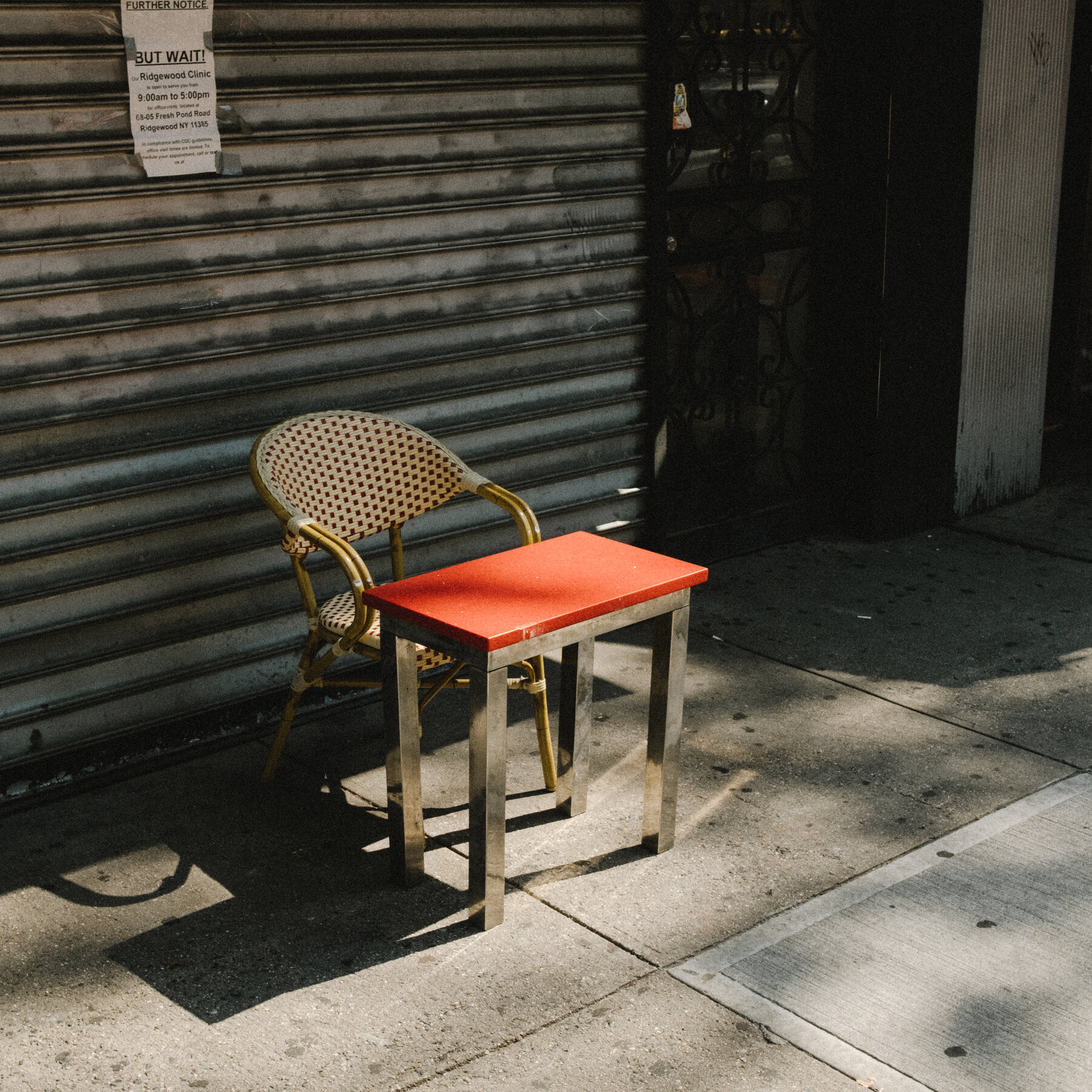 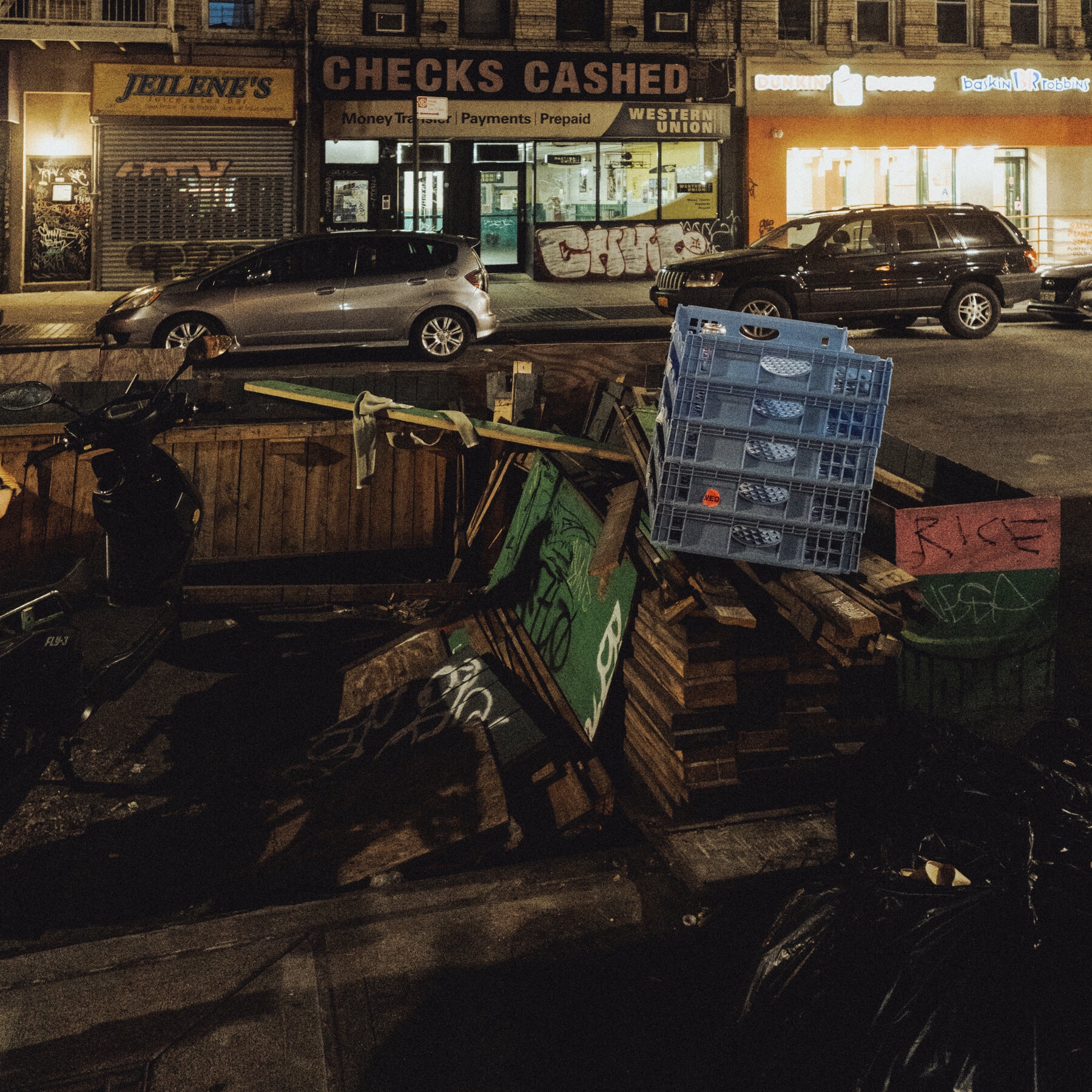 The pandemic prompted New York restaurants to create many different kinds of outdoor dining setups. Some have aged better than others.

It is a pivotal moment for the city’s restaurants — and the cobbled-together eating areas created during the pandemic.

It was 8:15 p.m. on a steamy Saturday night on the Lower East Side, and every table on Canal Street outside of Clandestino was occupied and buzzing.

The roadway tables next door at Le Dive were full as well, and at Cervo’s, down the street, and at Dimes, up the block. Laughter, chatter and the sound of clinking dishes hung in the air.

But just around the corner on Ludlow Street, tenants in upstairs windows were filming neighborhood scenes and posting them on Twitter, where they described the street as “trashed” and the patrons as having “zero regard for the neighborhood” — and blaming a mayor who, one resident wrote, “prioritizes nightlife over communities.”

More than two years after the necessities of the pandemic ushered in a new era of outdoor dining in New York City, what seemed to be a once-in-a-generation chance to change the streetscape has reached a pivotal moment.

What was once temporary is becoming permanent: restaurant seating both on sidewalks and in the roadways by the curb. In mid-August, Mayor Eric Adams announced that while abandoned dining sheds would be destroyed, outdoor dining was “here to stay.”

But as the summer winds down, the city faces decisions about what having dinner outside will look like going forward — a debate that raises larger questions about how New York should use its precious public space, and whose needs it should serve. 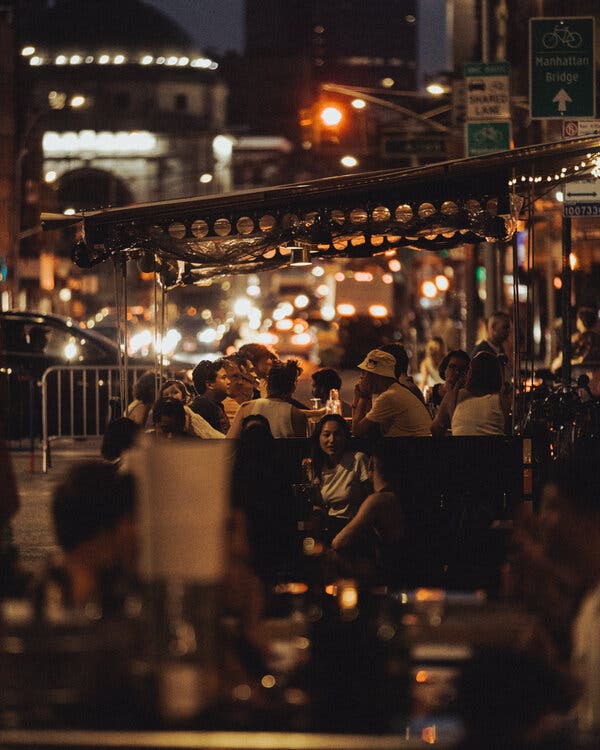 The dense number of restaurants on the Lower East Side have created large seating areas on the street. Some residents say the noise is unbearable and the neighborhood is being “trashed.”

Some New Yorkers are suing the city, claiming that the program has affected their safety and ruined their quality of life, pitting neighborhood residents against the small businesses that help make those neighborhoods special, and make New York a magnet for visitors.

While the Department of Transportation issued temporary guidelines for restaurants in 2020, the Adams administration has not yet dictated specific standards that businesses must follow for their outdoor dining operations going forward. According to the mayor, the planning of the new, permanent program — including the development of regulations that might help ease some of the problems neighbors have — is being slowed by litigation.

The new guidelines could cover design, pest control and public health. While the emergency of the pandemic allowed restaurants to use sidewalks and roadways, expect changes next year: Much like obtaining a sidewalk cafe license, restaurants will have to submit an application and pay a fee to seat guests outside on public property.

In addition, a new task force will address quality of life issues in the program, which the city calls Open Restaurants.

Many of the dining sheds cobbled together by restaurants over the last couple of years are now dilapidated and weather-beaten. Some are covered in graffiti or have exposed extension cords hanging overhead.

The Open Restaurants program is becoming permanent. Soon, restaurants will have to apply to create seating on sidewalks and in the roadways by the curb.

And while other dining sheds have been transformed and upgraded to become sturdy, impressive, year-round structures that replicate indoor spaces, with speakers for music and heaters, they often block access to the curb for pedestrians, taxis and emergency vehicles.

Some residents argue that the city should just put an end to this type of outdoor dining.

The plaintiffs in the lawsuit say they are being adversely affected by the Open Restaurants program. The emergency conditions created by the coronavirus have waned, the lawsuit argues, but the dining sheds remain, bringing noise, sanitation problems and an increase in rats.

“I understood the necessity of something like that at the height of the pandemic,” said Tanya Bonner, a plaintiff who lives in Washington Heights. “But that’s not where we are right now.”

Ms. Bonner said outdoor dining had contributed to unbearable noise in Washington Heights and nearby Inwood. “I think that the word is out that you can just come up here and just do whatever — a free for all.”

Ms. Bonner, who is a professor in the communications department at St. John’s University, is also the co-founder and chair of the WaHi-Inwood Task Force on Noise. She grew up in Chicago and has lived in New York for 17 years, “So I am not wimpy when it comes to living in a city,” she said.

Tanya Bonner is one of 35 people who have filed a suit against the city, claiming that the Open Restaurants program has a negative impact on quality of life.

Robert Camacho, 61, the chair of Brooklyn Community Board 4, is a disabled and self-described “loud Puerto Rican” who arrived in Brooklyn when he was 3 months old and has lived in Bushwick since 1974.

He said that because so many restaurants have set up dining areas along the curb, he can’t find a parking space close to home — or close to the grocery store. “Give us our street back,” he pleaded, bemoaning the problems the program has created for “seniors that can’t walk.”

Meera Joshi, the city’s deputy mayor of operations, recently announced the creation of a task force to address quality of life issues associated with Open Restaurants. The effort will be a collaboration between the Department of Transportation, the Department of Sanitation and the Parks Department, with assistance from the Police Department.

As of Sept. 2, the task force had already removed 55 sheds that were either abandoned or in violation of guidelines.

During the darkest months of the pandemic, outdoor dining was a lifeline that kept many restaurants from shutting down. But now it means increased capacity — and a boost in business.

Jeff Kadish, the founding partner of Bottom Line Hospitality and an operating partner of Bodega 88, a Latin-themed sports bar and restaurant on the Upper West Side, said that when the pandemic hit, being able to expand saved the restaurant.

Outdoor dining was a lifeline that kept many restaurants from shutting down. Now it means increased capacity — and a boost in business.

The bar added more sidewalk seating and created a dining area on Columbus Avenue. “It’s Covid, Wild West, you’re allowed to use the roadway, go for it,” he said.

Mr. Kadish said that Bodega 88’s outdoor seating had benefits for both diners and staff, and he pointed out that the restaurant wound up employing more people because of increased capacity for guests.

But upstairs from Bodega 88, Michael Kenna and all of his neighbors in his co-op building spent upward of $20,000 on noise-reducing windows.

Mr. Kenna, who is one of the plaintiffs in the lawsuit, said the bar had actually tripled its capacity and was known for drawing a crowd on the sidewalk and in the street on Columbus Avenue. When it comes to road noise or conversations — “you get used to that stuff,” he said. But the bar’s outdoor speakers? “Hearing the thumpa, thumpa, thumpa of music until midnight every night — and my bedroom is right there — is maddening,” he said.

Andrew Rigie, the executive director of the New York City Hospitality Alliance, said that even people who support the Open Restaurants program are aware that there are issues that need to be addressed.

Mr. Rigie is working with the task force assembled by City Hall, and noted that there are some legal and zoning changes that need to take place before the permanent version of Open Restaurants goes into effect.

The result is that eating outside in New York in 2023 probably won’t look exactly like it does now, Mr. Rigie said. He said the hospitality alliance would like to see the city approve multiple versions of outdoor dining setups that all have more standardized looks, with specific requirements for building materials. “We’re talking about outdoor dining, not recreating indoor dining outside.”

In addition, New York may see fewer restaurants opting for curbside dining in the future, once there is a formal application process — along with fees — in place.

In the meantime, people will continue to relish the opportunity to sit outside for dinner and entertainment, where New York is the show.

The city has assembled a task force to address quality of life issues associated with Open Restaurants. As a result, eating outside in 2023 probably won’t look exactly like it does now, according to one hospitality executive.

In Bushwick at the intersection of Wyckoff Avenue and Troutman Street on a recent Saturday night, throngs of people were gathered, some waiting for gorditas from a brightly lit taco truck, some sitting at tables in the street, some clumped in a line waiting to get into the venue Lot 45.

It was Davin Hazard’s first time in Bushwick and she was sitting at the nearby restaurant Sea Wolf with a friend, and Arthur, a French bulldog they were dog-sitting.

“The opportunity to get fresh air, to people-watch on the sidewalk, is an incredible thing,” Ms. Hazard, 29, said as she took in the animated, bustling scene. “And I think it feels like a very true New York experience.”

She was sympathetic to Bushwick residents like Mr. Camacho she said, but she had actively sought out a restaurant where she could bring a dog and dine outside. “This can be a compromise, right?”

Back on the Lower East Side, Bonnie Turtur, 37, was sitting by herself at a table outside of Dimes. Her husband had just left the restaurant with their child: “Our baby was throwing a tantrum,” she said.

When informed that people whose apartments overlook the restaurant were suing the city over noise, garbage and rats, Ms. Turtur paused for a moment. “I understand. If I lived upstairs, I’d probably be … I might be complaining.” Did the block where Ms. Turtur currently resides in SoHo have any dining sheds?

‘I Became a Regular at a Coffee Shop Around the Corner’

Kane Brown Didn’t Fit the Country Music Mold. So He Made His Own.