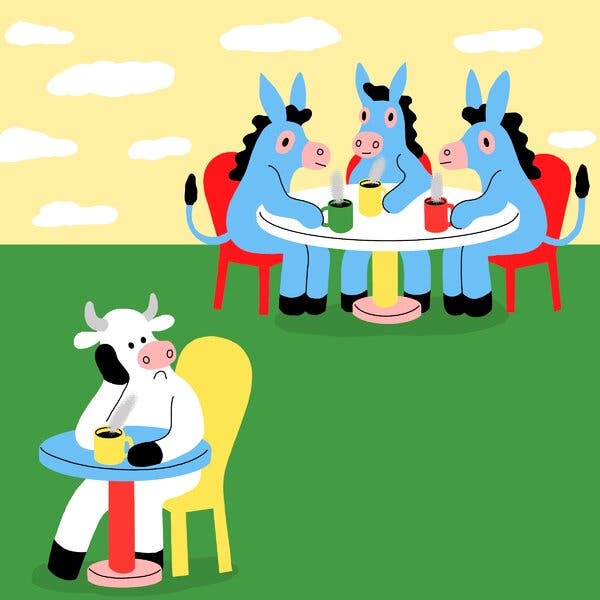 Maybe, just maybe, Mr. Cullen is revealing more about the problem with Iowa than anything about the Democratic Party when he complains that the Democrats’ proposed new primary schedule is set up to “dump the Iowa caucuses into the ditch.”

It does no such thing, of course; it merely deprives the Hawkeye State of its guaranteed gatekeeper status at the head of the line. Mr. Cullen’s self-righteous huffing that “discarding Iowa is not a great way to mend fences in rural America” seems to suggest that he feels that somehow his state is read out of the Union if it isn’t allowed to speak first when presidential primary season rolls around.

New Hampshire, which holds the first actual primaries, has a similar attitude. Neither state’s position on the electoral calendar was inscribed in stone, but you’d never know it from their champions’ zealotry on this issue.

Personally, I’d prefer to see the order of the primaries and caucuses reshuffled before every presidential election. That way, at least Iowa would be at or near the front at least some of the time, but one of the smaller, whitest states in the nation wouldn’t get to fire the race’s starting gun every time. Surely Iowans can find something else about their state to be proud of.

Art Cullen’s critique of the Democratic National Committee’s proposal to put South Carolina ahead of Iowa on the nominating calendar is misguided. Democrats haven’t dumped “the Iowa caucuses into a ditch.” Rather, they’re considering leading with a state with voter rolls that better represent Democratic voters and the country as a whole.

Mr. Cullen argues that diversity has a chance in Iowa, citing Barack Obama’s victory over Hillary Clinton at the caucus. But an overwhelmingly white electorate choosing a diverse candidate is not the same as a diverse electorate having its say in the process.

Rural states like Iowa have challenges, but they don’t need symbolic support like keeping the Iowa caucus first. Instead, they need real solutions, such as the Inflation Reduction Act, which provides subsidies for renewable energy projects that will bring economic vitality to rural areas.

I get that Iowans want to hold onto their position, but why should the rest of the nation take cues from this one state? It is time to hold national primaries, all on the same day. Let everyone in the nation vote, at the same time. This has the side benefit of shortening the ridiculously long primary season.

Humans and Wildlife: The Messages Are Mixed

What a joy to wake up to such a tender video of a woman responding to an abandoned newborn creature in her yard. Her son, Tom Krawczyk, is a gifted videographer whose obvious professionalism captured both his mother’s humanity and her concern for a wild animal’s future.

At this time of year, especially this year, it is a balm to witness such a poignant gem as this, reminding me of all that is fresh and good in the world and that this sort of intimate connection, wherever we find it, is the ultimate healing.

I was frustrated by the mixed messaging in The Times about how to best care for wildlife. The Dec. 5 Op-Doc about a woman raising a newborn squirrel as a family member is heartwarming, but unfortunately has the potential to seriously mislead viewers.

It counters the excellent advice found in a piece by Margaret Renkl (“Wildlife Rescue Heals the Human Heart,” Opinion guest essay, Dec. 7) about the importance of wildlife rehabilitation centers.

The responsible — and legal — thing to do when encountering orphaned or injured wildlife is to place the animal with a certified wildlife rehabilitator.

Home-raised animals can suffer from nutritional deficiencies or simply may not survive a well-meaning amateur’s aid. Animals that become acclimated to humans have been known to attack their caregivers or strangers who don’t understand their natural behaviors.

Their instinctual response to potential predators might also be compromised. (In this video, the squirrel was friends with a cat.) The most compassionate response is to put an animal’s care into the hands of someone who has the educational training to best support their survival.

Although it was heartwarming to read about the often heroic efforts of wildlife rehabilitators in helping injured and orphaned animals, I can’t help thinking about all the ways that other, less compassionate humans deliberately inflict harm and torture on our wildlife.

The indiscriminate trapping and snaring of wolves, the barbaric wildlife-killing contests that still take place in many states and all forms of recreational trophy hunting reflect an indifference to the suffering of our nonhuman kinfolk, who like us value their lives, strive to take care of their families and have every right to share this earth with us.

Re “The Child Care Crisis Has Been ‘Urgent’ Since ’86. Just Ask Cosmo,” by Jessica Grose (Opinion, nytimes.com, Dec. 7):

I read Ms. Grose’s excellent article with a sense of déjà vu — the more things change, the more they stay the same.

In 1982, a group of friends and I started a day care center on the Upper West Side because there were few options for full-time working parents.

We managed to receive support from a private foundation to help us set up the little center, secured space in a rundown synagogue, and founded one of the first Jewish all-day child care centers in New York City. We named it Yaldaynu, Hebrew for “our children.” (I am pleased to say it is still operating.)

It is sad that 40 years later, my daughter, one of those first children, and now a mother, still does not have quality, affordable day care options for her daughter.

When will the U.S. do what most of the rest of the West does and provide quality affordable child care for their citizens? Why is this not even on the agenda of urgentour country is facing?

Now is the time for Cosmo, which ran a cover story on this issue in 1986, to put it back on the cover, and for politicians, corporations and nonprofits to take action.

Tags
Iowa State That This Wild

Hubert Davis Brings Out North Carolina’s Toughness at the Garden