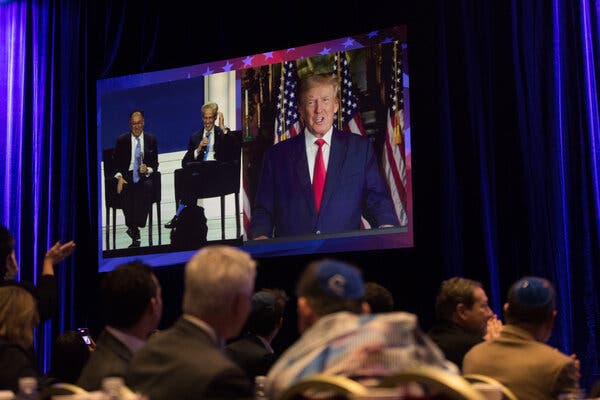 Re “Jewish Allies of Trump Recoil After He Hosts 2 Antisemites” (front page, Nov. 29):

Your article about Jewish Republican supporters “slowly peeling away” from Donald Trump raises the question, Why has it taken this long?

In the days after he was elected, spray-painted swastikas appeared all over the country. It’s been five long years since the Unite the Right rally in Charlottesville, Va., during which hordes of white supremacists chanted “Jews will not replace us!” and Mr. Trump infamously said there were “very fine people on both sides.”

As Jews, we of all people should know better than to let the fervor (and denying) mount for this long. We know the consequences.

Donald Trump’s recent dinner with Kanye West and Nick Fuentes, a white supremacist leader, is another example of the former president’s proclivity to grant an audience to anyone who feeds his ego.

Mr. Trump did much for the Jewish people and Israel during his presidency. He recognized Jerusalem as the capital of Israel and moved our embassy to this ancient city. The Abraham Accords are the most significant peace development in the Middle East since Camp David in the 1970s. On a personal level, the president’s daughter Ivanka is a convert to Judaism.

But apparently, all it took were a few kind words of flattery for Mr. Trump to grant an audience with two notorious antisemites. Leaders from Russia, China and North Korea will undoubtedly exploit this personal tendency of Mr. Trump’s to their advantage should he regain office.

In 2024, voters must ask themselves if they can stomach Mr. Trump’s transactional notion of “friendship” for another four years.

A few Republican politicians are speaking out against the former president’s dinner with two men with offensive views. Is this because those politicians are suddenly aware of Donald Trump’s previous antisemitic statements, or because he is apparently beginning to lose voter approval?

Very few topics infuriate me as an American Jew more than hearing prominent American Jews defending Donald Trump, particularly in the wake of his latest foray into antisemitic behavior. Mr. Trump made blatant antisemitism acceptable after he indirectly lauded those chanting “Jews will not replace us!” in Charlottesville.

His bigotry is not confined to Jews, and his vitriol has led to sharp increases in violence against Asian Americans, Black people and Latino immigrants. His track record of bigotry and hatred violates everything Judaism teaches, and his cozy dinner with Kanye West and Nick Fuentes should not, cannot, be glossed over and tolerated.

I am a Jew, but I am an American first and foremost, and I care about the values that our leaders espouse and display to the world.

The near-universal disdain that Mr. Trump is viewed with around the world should tell you everything you need to know about this dangerous man. I would classify him as a clown, but there is really nothing funny about him.

Photos of the victims of the Club Q attack were placed at a memorial near the scene. Credit…Joanna Kulesza for The New York Times

America is experiencing a contagion of mass shootings that gun rights advocates repeatedly assert is due to mental illness. But the rates of mental illness are much the same throughout the developed world, while countries such as Britain and Australia, with strict gun controls, have almost no such incidents.

Even a casual look at the genocides of the 20th century and current events demonstrates that human beings are capable of extremes of brutality and cruelty. These are kept in check by a thin patina of civilized values that may prove no more protective than a tinfoil hat under the relentless incitement of politicians who use bigotry and hate as political tools.

Gail Collins reminds us (column, Nov. 24) that Donald Trump went after Glenn Youngkin, governor of Virginia and a potential rival for the Republican nomination, by saying: “Youngkin … Sounds Chinese, doesn’t it?” What relevance could the sound of Mr. Youngkin’s name possibly have other than as a dog whistle cue to the next bigotry- and hatred-laden loner waiting in the shadows, angry with Asians for being … well, Asian?

Constant calumny against Nancy Pelosi leads to calls for her death and a break-in and assault on her husband. Derision of the L.G.B.T.Q. community spews from extremist mouths, disinhibiting and inciting the susceptible to horrific massacres.

“Good guys with guns” have shown us that they cannot stop the shooting while bad guys with big mouths go on fomenting it.

The Supreme Court, in Trouble

“I think that every justice should be worried about the court acting as a court and functioning as a court,” Chief Justice John G. Roberts Jr. said in 2006.Credit…Erin Schaff/The New York Times

The aspiration of Chief Justice John Roberts — to preserve the legitimacy of the Supreme Court as a venerated institution and to safeguard the credibility of its decisions — has been seriously undermined by the majority of justices currently on the court. His disappointment can be traced to two overarching factors.

The conservative justices, despite their earlier assurances, have abandoned their respect for precedent, the bedrock of any worthy judicial system. That same conservative majority also ignores the time-honored mandate of the court, to decide only issues raised by the litigants and to decide them as narrowly as practicable.

This court has an obvious agenda, which it pursues by reaching out for issues beyond the scope of cases being considered — the very essence of judicial activism — and then promulgates decisions that unnecessarily overturn firmly rooted constitutional protections.

When the public perceives that the court’s decisions are detached from enduring legal principles and seem only to reflect the political preferences of individual justices, respect for the court is shattered and the rule of law is put in dire danger.

Climate and the G.O.P.

The parched land and heat-stressed people described in this article are the heartbreaking reality our children and grandchildren will soon face everywhere. The resulting migrations to escape the worst effects will become a tsunami.

I do not understand why Republicans and others unwilling to invest in the infrastructure and lifestyle changes necessary to mitigate the severity of this outcome haven’t figured out that unless we address the climate crisis, the waves of immigrants pressing our borders in years to come will dwarf the current border “crisis” they decry.

Now that this election is over, can we please stop arguing over giving water to people standing in line to vote and instead discuss why there are such long lines to vote, and what we can do about it? Seems to me that waiting in line for more than 15 or 20 minutes should not be acceptable.

Tags
About That This Will With