Good morning. It’s Wednesday. We’ll look at a trip that will take Mayor Eric Adams nearly 6,700 miles from City Hall — and why he says he’s going. We’ll also look new ideas for an old and abandoned rail line in Queens. 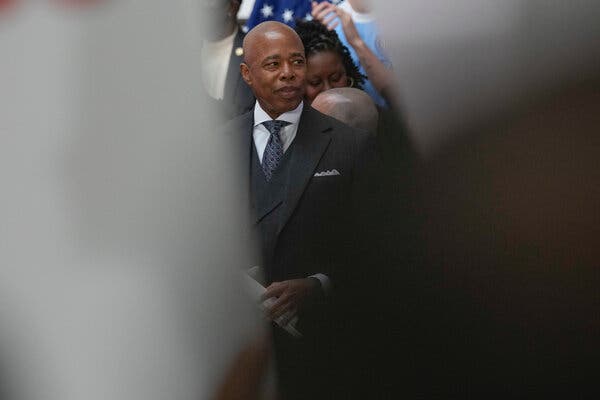 The question sounds like a 1980s video game: Where in the world is Mayor Eric Adams?

The answer sounds like a 1960s movie: If it’s Wednesday, this must be Greece.

The already-well-traveled mayor, who went to places like Azerbaijan, China and Turkey when he was the Brooklyn borough president and to Ghana when he was the mayor-elect, departs today on a four-day trip to Greece and Qatar.

In Athens, he will headline the second annual mayors’ summit of a group called the Combat Antisemitism Movement. Our politics reporter Dana Rubinstein writes that he will fly on to Qatar on what City Hall described as a fact-finding mission at the 2022 World Cup. New York will serve as one of 11 United States host cities for the games in 2026, and Adams said he was going for the same reason he sometimes rides the subway and visits homeless shelters.

“You have to be on the ground to see what’s going on,” he said, and he will be too busy to talk to reporters. His spokesman, Fabien Levy, told my colleague Emma G. Fitzsimmons in a text message that Adams’s schedule was “packed back to back” and that the mayor “won’t have time for an in-person on the ground.”

Nor will Adams see his son, Jordan Coleman, during the trip. A rapper who goes by the name Jayoo, Coleman has been competing in an “American Idol”-style competition in Albania, which shares a border with Greece.

When City Hall announced Adams’s travel plans, it noted that the police arrested two men at Pennsylvania Station on Nov. 18 who had tweeted about attacking a Manhattan synagogue. The trip comes a week after the former president of the United States had dinner with the performer Kanye West, who has been denounced for making antisemitic statements, and Nick Fuentes, an outspoken antisemite and Holocaust denier.

The Combat Antisemitism Movement, one of the hosts of the conference in Athens, said it would draw participants from 53 cities and 23 countries. Adams will headline the welcome dinner tonight and will deliver remarks tomorrow. The group said the mayors who attend would “share their challenges and solutions to counter hatred, bigotry, and antisemitism within their cities, in order to safeguard a shared and inclusive democratic future.”

The hosts will pay for commercial tickets to Athens and to Doha for Adams and Joel Eisdorfer, a senior adviser to the mayor who focuses on Jewish outreach. Eisdorfer will accompany the mayor, as will a police detail, according to a City Hall spokesman. The hosts will also pay their hotel bill in Athens.

In Qatar, Adams will pay for his hotel stay, as will Eisdorfer, the spokesman said. He did not say how much the police detail would cost taxpayers.

Kenneth Sherrill, a professor emeritus of political science at Hunter College, called the trip to the antisemitism conference the “kind of symbolic act that a mayor of New York would normally do.”

And the World Cup?

“There is no reason to go,” Sherrill said, “but since he’s in the neighborhood, it’s nice and neighborly and an opportunity to have a good time.”

Prepare for wind gusts and showers, with temperatures in the high 50s. Showers and wind gusts persist through the evening, with temps around the mid-30s.

In effect until Dec. 8 (Immaculate Conception).

It’s a gridlock alert day, largely because the Rockefeller Center tree lighting will take place tonight. Here’s what you need to know if you want to watch.

Some streets around Rockefeller Center will be closed to traffic for the holiday season, and others will have lanes blocked to make room for pedestrians.

In Queens, a new park? Or a new train line?

On a summery Friday evening just over 60 years ago, the 7:49 from Pennsylvania Station — the last Long Island Rail Road train still running on a three-and-a-half mile circuit through Queens — rumbled into history.

It has taken 60 years to decide what to do with the right of way that was left behind.

My colleague Winnie Hu writes that it looks as if reimagining the derelict line as the QueensWay, a park similar to the High Line in Manhattan, has the best chance. Mayor Eric Adams has already committed $35 million to turn nearly three-quarters of a mile of the city-owned rail corridor into a five-acre park to be called the Met Hub, a potential first step toward a linear park.

But a group of transit advocates has a plan known as the QueensLink that would restore rail service to neighborhoods that they say need transit more than they need extra green space.

The group behind the QueensWay plan, working with the conservation-minded Trust for Public Land, has raised more than $3 million in grants and donations since 2011. The two groups held a design contest in 2013 that drew 27 proposals from architecture and planning firms around the world.

Still, there is a case for using the tracks for trains. Queens residents have some of the city’s longest commutes to Manhattan. When Donovan Richards, the Queens borough president, lived in Far Rockaway, the commute to City Hall on the A train often took two hours.

“I got to Florida quicker than I got to Manhattan,” he said.

The state-controlled Metropolitan Transportation Authority, which runs the L.I.R.R., continues to study reactivating the line. A 2019 study by the agency estimated that restoring the line would cost between $6.8 billion and $8.1 billion. Another study commissioned by QueensLink supporters put the cost at between $3.4 billion and $3.7 billion.

Rick Horan, the executive director of the QueensRail Corporation, the nonprofit supporting the QueensLink, said the city should not design a park while the M.T.A. is mulling whether to bring the tracks and trestles back to life.

“It’s like putting in landscaping before building a house — you need to design them together,” he said.

The influential Regional Plan Association has thrown its support behind the park. (The association’s board includes Travis Terry, the president of Friends of the QueensWay.)

Noting that the transit authority has a long list of higher-priority projects, Tom Wright, the association’s president, said that the rail line was unlikely to be reactivated soon.

“Sometimes,” he said, “holding out for the perfect thing means that you don’t advance the projects that could really benefit communities in the short and midterm.”

I was at the bus stop on my way to an appointment when realized I had forgotten my phone and didn’t know the address of where I was going.

I asked a woman there if I could make a call on her phone to get the address. She looked at me somewhat suspiciously but dialed the number, and I got the address.

With no bus in sight, we decided to share a cab. She said she was a singer and was going to Carnegie Hall for a rehearsal with the Oratorio Society of New York.

She asked if I would like to attend that evening’s performance. I said yes, and she gave me two free tickets. In the meantime, we discovered that we lived in the same building.

After dropping her off, I tried numerous friends to see whether they wanted to join me, but they were all busy. So, as my mom would say, I took me myself.

What a fabulous production: about 200 singers, a full orchestra and a full house for a wonderful performance of “Whitman’s America” and another piece, “A Nation of Others.”

I’m glad I forgot my phone.

Melissa Guerrero and Ed Shanahan contributed to New York Today. You can reach the team at [email protected]

Tags
Said That Was Who Will

The Cake Recipe That Was a Secret for Two Decades

Mayor Adams Goes Abroad, for an Antisemitism Conference and the World Cup