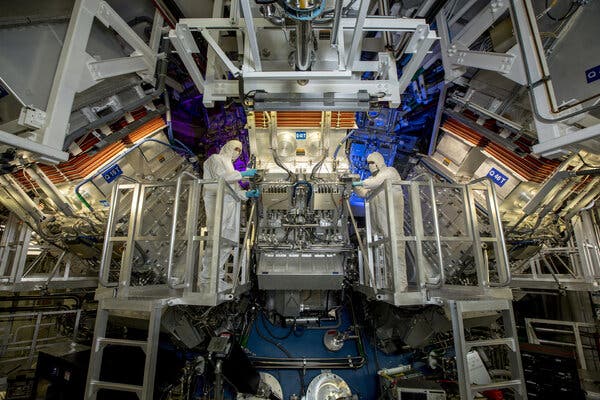 Re “A Blast of 192 Lasers Achieves a Breakthrough in Nuclear Fusion” (front page, Dec. 14):

California gives us a glimpse of the incredible impact a working fusion reactor could offer to the world. Clean, limitless energy without greenhouse gas emissions and virtually no toxic residues.

While the engineering challenges are enormous, they are not insurmountable. Sort of akin to where we were in 1961, when President John F. Kennedy set the goal of putting a man on the moon by the end of the decade. Many of those who knew anything about rocketry said it was impossible.

Cheap fusion energy would be the ultimate energy security and economic engine for a prosperous future for the world.

The ability of Lawrence Livermore National Laboratory to direct 192 laser beams to ignite a fusion reaction and fleetingly produce a small amount of heat is a scientific breakthrough, but hardly one that should inform energy policy.

The hype in the 20th century was that nuclear energy would be cheap and boundless. Nuclear turned out to be increasingly costly. The only perpetual product was radioactive waste. So now the jive is that “advanced” fission reactors and fusion will magically solve all problems in future decades.

Meanwhile, don’t look too carefully at the billions of dollars being diverted away from renewables, efficiency and energy storage solutions that could be rolled out rapidly now for far less money, with present-time climate benefits — and without the risk of nuclear weapons proliferation.

Michel Lee
Scarsdale, N.Y.
The writer is an attorney who has worked pro bono on nuclear-related policy matters.

I will always remember when and where I first heard about the nuclear fusion breakthrough: on the morning of Dec. 14, 2022, at approximately 8:30 a.m. at the breakfast table. That’s when I learned that planet Earth has a genuine chance of remaining habitable over the long term and that humankind — along with innumerable other deserving species — has a genuine chance of surviving over the long term. What incredibly hopeful news!

Now we can hope that the nations of the world will somehow manage to keep our beleaguered planet viable and chugging along until that long-dreamed-about future day finally arrives.

We have had unlimited free and clean fusion energy for over four billion years. All we need to do is scoop up the energy and make electricity from it. We know how to do this now.

The clean, free and unlimited energy is called “sunlight.” Every country on earth has access to it.

Mayor Eric Adams is pushing city medical workers and police officers to move more severely mentally ill and homeless people to hospitals where they can get help. Credit…Dave Sanders for The New York Times

Re “The Root Cause of Violent Crime Is Not What We Think It Is,” by Phillip Atiba Goff (Opinion guest essay, Dec. 13):

Dr. Goff’s critique of the efforts of Mayor Eric Adams’s administration to reach homeless New Yorkers who are suffering from severe mental illness amounts to a serious misreading of our stated policy.

Our approach is based on compassion, with the goal of protecting both the public and those in crisis — and we have the strong support of many advocates, including the families of those who are in desperate need of involuntary mental health treatment.

Mr. Adams’s job as mayor of New York City is to protect public safety, including the safety of those New Yorkers who have been left behind by our broken mental health system.

A Supreme Court Case About the Power of State Legislatures

Credit…Illustration by Rebecca Chew/The New York Times; photograph by the Library of Congress

Re “This Case Shouldn’t Be With the Supreme Court” (editorial, Dec. 11), about a case that would greatly expand the power of state legislatures:

Any Supreme Court justice claiming to be an “originalist” must dismiss this case out of hand, for the authors of the Constitution almost universally agreed that a basic purpose was to rein in the state legislatures.

In the 1780s, state legislatures, newly including small farmers and tradesmen, appeared to be running amok in promoting too much populism, particularly undermining property rights, allowing easy money to stoke inflation and enabling people to avoid paying their debts, among other things.

A sensible explanation of the phrase assigning the “Times, Places and Manner of holding Elections for Senators and Representatives” to each state legislature is purely for the administration of elections to accommodate local conditions. The framers certainly rejected the idea of “independent state legislatures,” believing strongly in judicial review at the state and national levels.

To undo the fundamental principle of checks and balances designed to preserve liberty and reduce the possibility of governmental oppression at the state and national level would be to violate the very purpose of the Constitution itself.

Richard H. Kohn
Kenneth Bowling
Mr. Kohn is professor emeritus of history at the University of North Carolina at Chapel Hill. Mr. Bowling, a historian, was co-editor of the 22-volume “Documentary History of the First Federal Congress.”

No to Appeasement Over the Ukraine War

Re “Are We in the West Weaker Than Ukrainians?,” by Nicholas Kristof (column, Dec. 15):

Western democracies have tried appeasement before, for example in the 1930s in the face of Hitler’s demands. The Nazis then invaded country after country in World War II. Many Americans wanted to stay out of the war in Europe.

Appeasement did not work very well then. We are facing a similarly dangerous situation now. We should do everything we can to support Ukraine without spreading the conflict unnecessarily.

Re “Trump Hawks Images of Self as Superhero” (news article, Dec. 16):

Former President Donald Trump — the Man Who Would Be King (with apologies to Rudyard Kipling) — has announced from his Truth Social digital podium that he is now selling digital trading cards of himself in heroic poses.

We can purchase him as a caped superhero, an Old West sheriff, an astronaut, etc., for only $99. Each.

This is beyond curious. It’s beyond cute. It’s actually sad to watch a former president — an announced candidate for 2024 — reducing himself to the level of a carnival sideshow barker. Many of us are saddened to witness his decline.