OMER ARBEL USED to live on the cliff’s edge. He had a windswept shack perched on a promontory overlooking the industrial port of Vancouver, British Columbia, the sort of experimental space — “no handrails,” he says, “and sharp things everywhere” — befitting an avant-garde architect and lighting designer. Then in 2015 he met a ballerina, Rachel Meyer, and after having a child together two years later, they decided to find a more conventional home, one fully at odds with his personal aesthetic.

In his own practice — he builds bespoke residences and objects for private clients and since 2005 has served as the artistic director of Bocci, a British Columbian lighting and glassblowing studio he co-founded — Arbel aims to “activate these traditional, cozy spaces with some extreme things,” he says. The designer is seated at a round wooden table in his low-ceilinged kitchen on a damp Vancouver afternoon beneath a primordial aluminum light fixture he calls 44 (all of Bocci’s pieces are chronologically numbered), which was first exhibited in 2016 at the Barbican Centre in London and looms over him like a floating coral reef. “There’s a tension between these aggressive interventions and this unassuming interior.” 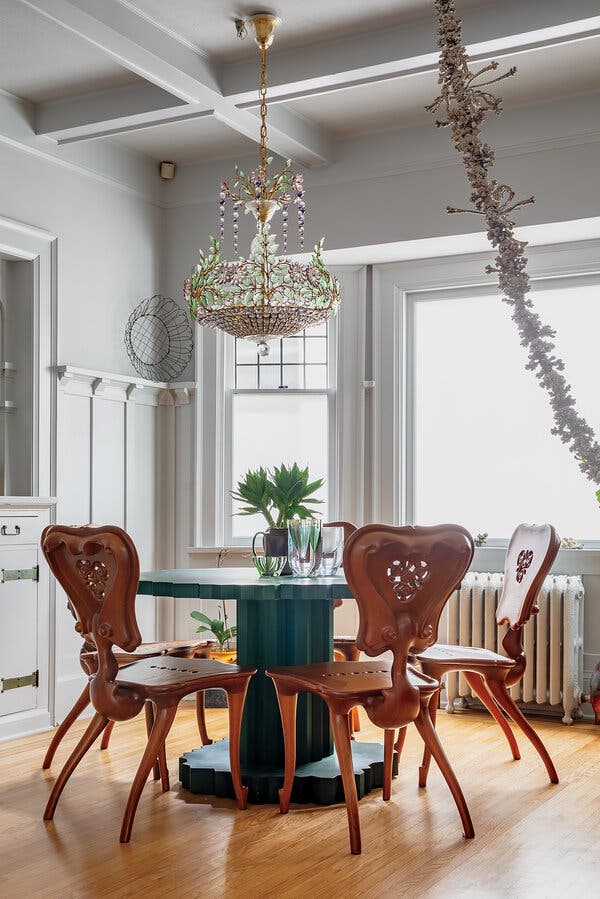 Arbel, 46, was born in Jerusalem and raised in a severe Bauhaus-style house. His father practiced law; his mother taught religious studies with a focus on ancient mysticism. He has lived in and around Vancouver since 1989. Comparing the area to San Francisco, he said that he had watched with dismay as “neighborhoods that used to have a community feeling have been — some over the course of five years — completely gutted by the forces of gentrification,” adding, “So many of the houses are seen only as real estate assets; they’re not actually lived in.” If he and Meyer, 35, were going to buy in town at all, they wanted to do so in East Vancouver, a neighborhood historically shared by immigrants and graffiti artists, near the office he bikes to whenever it’s not raining.

THE HOME THEY chose was the first they saw — a sage green Craftsman bungalow built in 1910 with a magnolia tree then in pink bloom beyond the front porch. The place needed lots of work: The foundation had crumbled; the basement had standing water. Although they spent two years restoring the entire structure, they kept the original layout, a counterintuitive choice that reveals itself immediately upon crossing the threshold. Everywhere, there are doors made from Douglas fir that the couple often keep closed, creating intimate vignettes from room to room that rebuke the contemporary preference for open-plan environments. “There’s a temptation to bust down walls and connect the dining room and kitchen,” Arbel says. “But instead, we thought, ‘Let’s try to respect the original architect’s vision and see how we do.’” This, in turn, allows them to live as previous residents might have: Once or twice a week, the family cooks a special meal in the compact kitchen and serves it in the adjacent formal dining room.

Arbel designed the pendant lighting, the screen and a marble tub for his bathroom. The tiles are from Heath Ceramics.Credit…Andrew Rowat

To avoid feeling closed in, they streamlined the small rooms wherever they could. Arbel loathes unsightly light switch plates, so the kitchen doesn’t have any. He also despises drawer pulls and handles and pointed to the smooth cabinetry, noting his preference for “as few protrusions as possible.” Even the toilet is missing a handle. His bathroom is covered in hexagonal tiles from Heath Ceramics, all of which are forest green; you press a sole white aluminum panel to flush.

The rest of the home’s walls are of matte white-painted burlap, and the couple has placed sculptural furnishings throughout to keep the place from feeling too austere. In the foyer, there’s a florid oak Calvet bench designed in 1902 by the Surrealist Spanish architect Antoni Gaudí; instead of a coffee table, they installed a rock formation of polished marble boulders in streaky shades of Creamsicle, pistachio, black and jade. Suspended from the ceiling is a pearlescent 2017 Bocci light fixture, 87, that stretches out like saltwater taffy. These whimsical touches are packed into a ground-floor living space that’s 1,250 square feet; a 500-square-foot attic that the couple call their love nest, a refuge away from their 5-year-old daughter; and a 1,300-square-foot basement that contains Meyer’s ballet barre and a guest suite.

Outside, on the property’s modest plot, they’ve planted a vegetable patch near a salvaged industrial culvert that serves as a makeshift kiddie pool. There’s also a homemade treehouse in the backyard, complete with its own skylight — in this family, even a child’s play area must be nicely lit. The adjacent garden includes sculpture 16, from 2015, essentially a bead-blasted steel tree that sends low-voltage electricity through a network of branches and twinkling glass leaves.

None of this illumination — even the natural light, this being the Pacific Northwest — is particularly bright, allowing the project’s disparate elements to play off each other. To Arbel, a true sense of coziness ultimately comes from “many sources admitting light horizontally, ideally and not too much,” creating a sense of mystery, of life that can be lived in the glow of perpetual dusk. 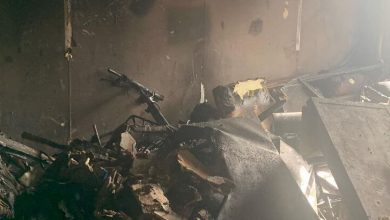 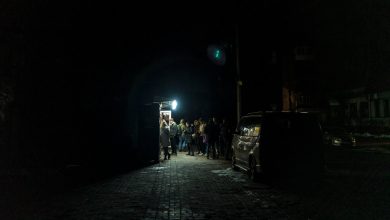