The stories the mothers tell when they gather at the Awendo Health Centre in western Kenya are a catalog of small failures, missed opportunities and devastating consequences. What unites the two dozen or so women who meet periodically, on wooden benches in a bare clinic room or under a tree in the courtyard, is their children: All have H.I.V.

It has been two decades since efforts to prevent the transmission of H.I.V., the virus that causes AIDS, from mother to child during pregnancy and birth began in earnest in sub-Saharan Africa. Yet some 130,000 babies are still becoming infected each year because of logistical problems, such as drug shortages, and more pernicious ones, such as the stigma that makes women afraid to seek tests or treatment.

Then, many of the children who contract the virus are failed a second time: While the effort to put adults on H.I.V. treatment has been a major success across the region, many children’s infections are undetected and untreated.

Seventy-six percent of adults living with H.I.V. are on treatment in sub-Saharan Africa, according to U.N.AIDS, a United Nations program. But just half of children are.

An estimated 99,000 children in sub-Saharan Africa died of AIDS-related causes in 2021, the last year for which there is data. Another 2.4 million children and adolescents in the region are living with the virus, but just over half have been diagnosed. AIDS is the top cause of mortality for adolescents in 12 countries in East and Southern Africa.

“The focus for a decade in the global AIDS response has been controlling the epidemic, and it’s amazing that treatment has reached so many adults,” said Anurita Bains, who heads global H.I.V./AIDS programs for UNICEF. “But children aren’t going to spread H.I.V., so they dropped down the priority list. They’ve been almost forgotten.”

She added: “Children with H.I.V. are harder to find than adults, we have fewer tools to test and treat them, and they rely on their caregivers to access health care.” 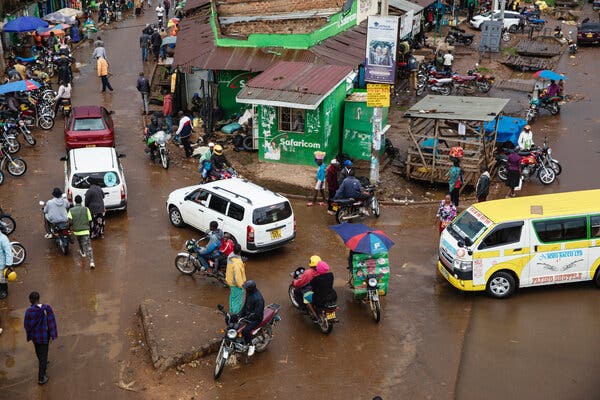 Migori, a town in western Kenya, has one of the highest rates of H.I.V. prevalence in the country. Many clinics here haven’t had H.I.V. tests to give pregnant women for several years.

Preventing a woman from passing H.I.V. to a child at birth is, in theory, relatively straightforward. The national policy in every sub-Saharan African country with a high prevalence of H.I.V. stipulates that all pregnant women are to be screened for the virus and that those who test positive should start treatment right away.

To catch any missed cases, women are supposed to be tested again when they are in labor. If they are positive and not on treatment, they are to be given drugs to block transmission. Their babies should be given another drug for the first six weeks of life. In more than 90 percent of cases, this protocol is enough to prevent a child from becoming infected. A mother on H.I.V. treatment has a low risk of infecting a child while breastfeeding.

The Fight Against H.I.V.

An estimated 40 million people are living with H.I.V. worldwide. About 10 million of them do not have access to treatment.

But progress has flatlined in several countries in the last five years, and the Covid pandemic set it back further, with disruptions to the supply of tests and drugs, clinic shutdowns, staff shortages and a shifting away of attention to the fight against AIDS.

“It’s very painful when you are with a pregnant woman who is almost delivering and there is no medication and you wonder, Will the child be positive or not?” said Caroline Opole, who is a volunteer “mentor mother,” counseling women who test positive for H.I.V. at prenatal testing as she did.

A pharmacist packed a bottle of antiviral pills at the pharmacy at the Ogwedhi Health Centre in Migori.

“Prevention of mother-to-child transmission, whereas there has been a lot of effort to scale it up, has not performed as well as we should have done,” said Dr. Andrew Mulwa, director of medical services for the national health ministry in Nairobi.

Laurie Gulaid, UNICEF’s Nairobi-based regional adviser on H.I.V./AIDS, said the problem here in Kenya and beyond was the gulf between written policy and what the government actually funds, makes a priority and puts into practice in primary health centers such as Awendo.

“The intentions are good, but the infrastructure, the resources, the training, the staff — those aren’t there yet, not the way they need to be,” she said.

In Migori, a county in the region that has one of the highest rates of H.I.V. prevalence in Kenya, many public clinics haven’t had H.I.V. tests to give pregnant women for several years. Depending on whom you ask, this is because of supply chain disruptions, disputes with donors or poor planning by officials. If women know they have H.I.V., then sometimes their babies are on antiretroviral medication. But sometimes those pediatric drugs are out of stock, too.

Ms. Bains of UNICEF said countries needed to redouble their commitment to children. “We need to find the kids we’ve missed, test them, get them on to treatment,” she said. “We need resources to do this, but it also requires robust health care systems and capacity — nurses in clinics and community workers supporting mothers.”

Joyce Achieng, left, with her children and others at her home in a village outside Migori. She has struggled to get treatment for two who have H.I.V.

Closing the treatment gap for children will also take political will, she added. “When international funding is being allocated to a country, we need to always ask, How will the money be used to reach and support children living with H.I.V.?”

But even when the drugs are available, it is not always as simple as taking them, as Joyce Achieng knows. Ms. Achieng was not screened for H.I.V. when pregnant with her first two children, now 12 and 10. She learned she was infected after being tested while pregnant with her third, a girl who is now 7.

But a woman in this region is accused of infidelity if she tests positive, Ms. Achieng said, and she feared she might be assaulted or driven from her home if she told her husband.

At the time, her husband was working in another part of the country, so she could begin H.I.V. treatment and give the drugs to the baby after her birth while keeping the news to herself. Her daughter tested negative for H.I.V. at age 2. When the clinic encouraged Ms. Achieng to bring her other children in for testing, she did and learned they were negative, too.

A year later, she became pregnant again, but this time her husband was home. She couldn’t always hide the drugs she needed for herself or the new baby, another girl. It was hard to come up with excuses to walk the eight kilometers to the clinic to pick up medications or a reason that she needed 100 shillings (about a dollar) for a motorbike taxi. So neither she nor the baby took the drugs consistently, and the infant tested positive for H.I.V. at 6 weeks old.

“I cried for the longest time,” Ms. Achieng said. The nurse who gave her the news urged her to start treatment for herself and her daughter again, but she was overwhelmed with guilt and despair.

“I said, What is the use, if I have made my own child sick?”

Nancy Adhiambo, left, and her children outside her home in Ogwedhi in Migori County, Kenya.

Eventually, some tenacious medical staff and volunteers helped her tell her husband she had H.I.V. and to resume treatment. Today, Ms. Achieng is fit and cheerful, and her daughter runs into the house after school to show her a page where she has labeled and colored fruits and shapes. She giggles softly when her older brother takes her for rides in a wheelbarrow.

Her daughter takes a pediatric formulation of a drug called Dolutegravir. A highly effective antiretroviral medicine, it recently became available as a strawberry-flavored syrup, which spares parents from battling to get small children to swallow pills each day.

“The new drugs do wonders,” said Tom Kondiek, the pediatric clinical officer at the main public hospital in Migori. “Children who are on their deathbed, you start them on medication and then you see them very active and you would not even know they are suffering from H.I.V.”

But to start them on medication, health workers must know the children have the virus, and that is where the system breaks down, he said. They may be brought to a clinic over and over but never be tested because staff don’t think of it for a child of 4 or 5, or because there are no tests available.

Even when individual women are diagnosed and connected with treatment, health systems too often fail to think of their families, Ms. Gulaid said. In routine care, children are typically seen at 6 weeks old for immunizations and a nutrition screening, but H.I.V. tests are included only for babies known to have been exposed. Other children may not be seen again unless they fall very sick, and it is not standard practice to test all children, the way the clinic did with Ms. Achieng’s.

Ms. Adhiambo, picking up her antiretroviral drugs from the Ogwedhi Health Center, chatted with Sheila Abuyu, who oversees H.I.V. care there.

Nancy Adhiambo, a mother of five, learned she had H.I.V. during her third pregnancy. She started treatment but struggled to stay on the drugs as she moved around while leaving a chaotic relationship, and she couldn’t obtain medication consistently for her baby.

That little girl, who is now 8, wasn’t tested for H.I.V. for years, even though she was often sick with pneumonia as a toddler. It wasn’t until last year, when Ms. Adhiambo found herself living down the street from a clinic in Migori town and joined a tightknit mothers’ group that she had all her children tested and learned that her third child was infected. So was her last-born, a 1-year-old. (Her two oldest and her fourth child were negative.)

These days, the older daughter’s H.I.V. is well controlled, and so is Ms. Adhiambo’s. Her face folded into a pleased half-smile when the clinic director congratulated her on the girl’s low viral count.

But when Ms. Adhiambo stopped by the pharmacy for the children’s drugs, she heard the same answer she had been given for weeks: The free pills were out of stock. She couldn’t afford the ones that were for sale in town, given that she earns at most a thousand shillings, about 10 U.S. dollars, each month as a hairdresser, she said, so she would divide her remaining tablets among the children.

“Poverty complicates things,” she said bluntly. “We can only hope for the best.”

Tags
She That Treatment Was With

With 50 Dead in Peru, a Referendum on Democracy