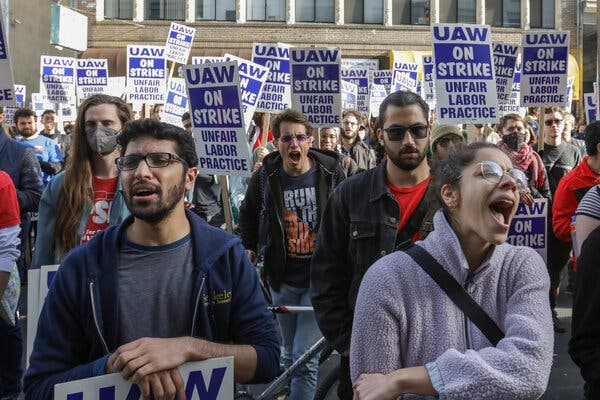 Vivek Bharadwaj, left, a grad student researcher, and Anisah Awad, a community supporter, chanted with University of California workers on Monday in front of the U.C. office of the president in Oakland.Credit…Salgu Wissmath/San Francisco Chronicle, via Associated Press

With the University of California strike in its third week — and threatening to encroach on final exams for some 300,000 students — negotiators announced a breakthrough on Tuesday: a tentative agreement that would cover about one-quarter of the unionized workers who walked off the job in the largest university-based labor action in U.S. history.

The deal, if ratified, would significantly raise pay and improve benefits for about 12,000 academic researchers and postdoctoral scholars, according to Neal Sweeney, president of U.A.W. Local 5810. It is also expected to hasten settlements with some 36,000 graduate student teaching assistants, researchers and tutors, who are still negotiating with the university system.

That’s the good news. The bad news: The deal doesn’t end the walkout that has upended fall instruction from San Diego to Berkeley. Until the university has reached agreements with all of the strikers, the postdocs and academic researchers will remain off the job in solidarity, Sweeney said, noting that the student researchers have been awaiting a response to their latest proposal for more than 12 days.

The striking workers — who run labs, lead class discussion groups and perform much of the day-to-day work — have called for significant pay increases in the face of soaring housing costs in California, particularly as wages have risen elsewhere in a tight labor market.

Since the academic employees walked off the job, classes have been disrupted, office hours have been canceled and labs have temporarily closed.

The tentative five-year agreement announced Tuesday would raise salaries by some 20 percent for most postdocs over the next year, and would increase pay for the lowest-paid postdoctoral workers 57 percent by 2027. Academic researchers would get a 4.5 percent raise in the first year of the contract and at least 3.5 percent a year after that.

Paid family leave would double to eight weeks; postdoctoral workers would receive up to $2,500 in child care subsidies; and initial appointment periods would be lengthened to improve job security, particularly for international workers. Workers would also receive enhanced transportation benefits — including a discount on e-bikes — as well as stronger protections against abuses in the workplace.

The 10-campus university system — which has been under pressure from Democratic leaders in pro-labor California to reach a deal — lauded the agreement, calling the academic workers “vital to U.C.’s research activities.”

For $1.8 million: A renovated showplace in Los Angeles, a ranch house in Sonoma and a midcentury home in Orinda.

A rich, autumnal galette that takes its inspiration from French onion soup.

Tell us about your favorite places to visit in California. Email your suggestions to [email protected] We’ll be sharing more in upcoming editions of the newsletter.

Did you recently buy or rent a home in California? We want to hear from you.

The New York Times’s weekly real estate column, The Hunt, features everyday people who just moved and want to share their stories. If that’s you, get in touch with us at [email protected]

Stanislaus National Forest is allowing up to 5,000 people to cut down their own tree at no charge this holiday season.

The drive to the forest, about three hours east of San Francisco, may cost you, but it’s a fun family experience — and for a good cause, NBC Bay Area reports.

“Christmas tree permits are being offered to the public in an effort to help reduce hazardous fuel ladders that have built up over years of fire suppression,” the U.S. Forest Service said. “Removal of excessive amounts of small trees from the forest will help create a healthier forest over time.”

Thanks for reading. We’ll be back tomorrow.

Ukraine welcomes a U.S. push for energy aid, saying time is of the essence. 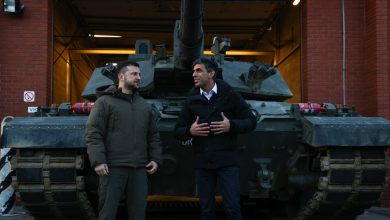 Zelensky Brings a Shopping List to Britain, With Fighter Planes at the Top

Biden’s Vision About How to Heal America