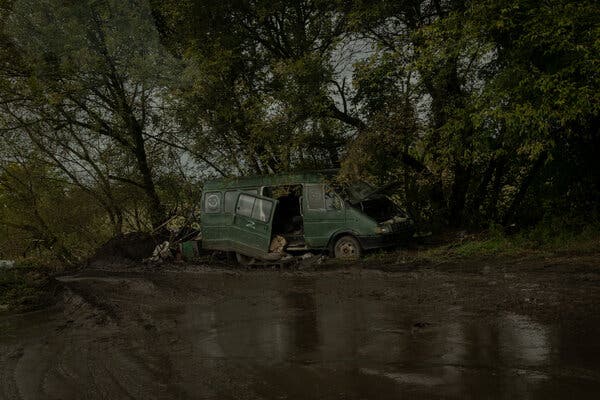 A vehicle used by Russian forces, outside Balakliya, Ukraine.Credit…Nicole Tung for The New York Times

As the Ukrainian army closed in, the Russian army fled the town of Balakliya in northeastern Ukraine, leaving a trail of desperation and disarray in its wake. Ukraine’s lightning assault has allowed its military to recapture hundreds of square miles of territory, strategic towns and abandoned weapons.

As the Russian defenses around the town collapsed, residents said, soldiers ran for whatever transportation they could, leaving behind ammunition and weapons along with personal items in apartments where they had stayed. Clothes were left hanging on the line, and mail was scattered across the floor.

The accounts, along with others from the Kharkiv region, shed a harsh light on apparent morale and communications breakdowns within the Russian occupying forces that could have broad implications for the course of the war. Some witnesses described the Russian troops as increasingly ill-disciplined, unpredictable, anxious and, in some cases, simply scared.

By the numbers: Around 150,000 people in 300 communities in northeastern Ukraine are living in areas reclaimed from Russian control, a Ukrainian official said. But Russia still holds vast swaths of territory in eastern and southern Ukraine and outguns the Ukrainians with artillery and tanks.

Visualizations: These maps show how much territory Ukraine has reclaimed. And these videos show the liberation of Ukrainian towns.

The S&P 500 had been trading higher in the hours before the figures were released.Credit…Ella Koeze/The New York Times

Consumer prices in the U.S. rose 8.3 percent in the year through August, a report showed yesterday, cutting against economists’ expectations and throwing doubt on the belief that inflation had peaked. In response, stocks plummeted and government bond yields soared. Inflation figures for Britain will be released later this morning.

The S&P 500, which had been trading higher in the hours before the data was released, slumped 4.3 percent by the end of the day to 17.5 percent below where it had started the year, its biggest drop since the depths of the coronavirus pandemic in June 2020. The index had climbed about 5 percent in the week leading up to the report.

This summer has been characterized by choppy trading and shifting expectations. Better-than-expected earnings, along with some signs that inflation might have peaked, had helped lift stock prices in July and early August. But after Fed officials warned that interest rates still needed to move markedly higher, stock prices fell once again.

Expectations: Even before the inflation data was released, investors were anticipating another big rate increase, of three-quarters of a percentage point, when the Fed meets next week. That increase may be as much as a full percentage point, increasing borrowing costs by the most since 1984.

For more: Inflation is bad, but the job market is strong: the U.S. economy, in charts.

Mourning and symbolism in Northern Ireland

King Charles III visited Northern Ireland yesterday on a national tour of sorrow after the death of his mother, Queen Elizabeth II. There, Alex Maskey, the speaker of the Northern Ireland Assembly and a member of Sinn Fein, the Irish nationalist party, expressed his condolences in Irish: “May she rest in peace.”

Charles and his mother each played a role in trying to reconcile the Irish and the British after the blood-dimmed tide of the Troubles. The fruits of their efforts were on vivid display in a bereaved Belfast. Yet the new king also confronted a Northern Ireland that is drifting inexorably, if slowly, toward the Irish Republic.

But the country’s tense politics took a back seat to a day of rituals and mourning for the queen, which spoke to her appeal on both sides of the Irish border. Her visit to the Irish Republic in 2011 — during which she wore green, expressed regret for Britain’s painful history with Ireland and tried out some Irish language — is remembered there as an electric moment of personal diplomacy.

Analysis: The death of the queen puts nationalist leaders in a difficult position, said Katy Hayward, a professor of politics at Queen’s University, Belfast. “Many nationalists feel uncomfortable with the king,” she said. “At the same time, they’ve got to be considerate of other people who feel differently.”

Andrew Sean Greer was elated, if a little confounded, when his 2017 novel “Less” received the Pulitzer. A sequel, “Less is Lost,” comes out next week.

“Less” began as a somber literary novel about a gay, middle-aged writer who reflects on aging and his fear of irrelevance. But even Greer could scarcely bring himself to care about his hero — and so decided to make fun of him instead. “There’s a lot of sad books about being queer,” he said. “I thought I would really like one on my shelf that has some sense of joy in it.”

FIFA demands ‘ineligible’ Ecuadorean player attend bombshell World Cup hearing: The Chilean Football Association claims it has “compelling evidence” that an Ecuadorean player is actually Colombian, which could disqualify Ecuador from this fall’s World Cup and send Chile in their place. The matter could be settled at a hearing Wednesday.

How policing numbers for Queen Elizabeth II’s funeral have impacted the Premier League: The soccer slowdown in London isn’t over. Police from all over have been called to assist in the queen’s funeral, which has ripple effects for any matches set for this weekend in the city.

The Franco-Swiss cinematic luminary Jean-Luc Godard, whose work changed the course of filmmaking in the 1960s, died yesterday at 91 by assisted suicide at his home in Rolle, Switzerland. Read our obituary, and our list of nine Godard films to stream now.

In an appraisal, Manohla Dargis, The Times’s co-chief film critic, describes a “vexing giant” who promised that movies could be far more than moneymaking machines. “Cinema is art — or can be — and it’s political, as he also insisted,” she writes. “It feels impossible to articulate the immensity of his impact on cinema.”

For many people, “Breathless,” or “À Bout de Souffle,” is the quintessential New Wave film. Produced on a $70,000 budget, it seemed to fulfill Godard’s famously dismissive dictum, “All you need to make a movie is a girl and a gun.”

A 1961 review in The Times makes for bracing reading. This “sordid” film, the critic Bosley Crowther writes, is “a fascinating communication of the savage ways and moods of some of the rootless young people of Europe (and America) today.” Its hero, per the critic, is “hypnotically ugly,” while the movie is not for any “easily shockable individual.”

And yet, for all that, the praise pours forth: “Say this, in sum, for ‘Breathless’: it is certainly no cliché, in any area or sense of the word. It is more a chunk of raw drama, graphically and artfully torn with appropriately ragged edges out of the tough underbelly of modern metropolitan life.”

How long is the drive to the end of the universe?

The latest episode of “The Daily” is on Ukraine’s advance.

You can reach Natasha and the team at briefing@nytimes.com.