It’s called the Los Angeles River but it’s really a 51-mile stretch of concrete. In the 1930s the U.S. Army Corps of Engineers started lining the waterway to limit the risk of flooding in the rapidly growing city.

Now work is underway to make the river more like what it once was. In a segment called the Bowtie parcel, scientists are seeking to transform what was once a busy rail yard into a place where life can thrive again, and where people can go and enjoy nature.

“The hardest thing is to see something that isn’t there, so you need to help make the invisible visible,” said Lewis MacAdams, a poet and activist for bringing nature back to the L.A. River, before he died in 2020. He shared that idea with Kat Superfisky, an urban ecologist with the City of Los Angeles who works on the river.

But when so much of the life that existed along the river was erased long ago by concrete, how do you make the invisible visible? Part of the answer involves studying organisms that died within the past 60,000 years or so.

Along the L.A. River and in other parts of the world, the Earth’s fossil record is helping inform the preservation and enhancement of natural landscapes. It’s part of a growing field called conservation paleobiology, which aims to use dead and buried life to help scientists like Ms. Superfisky accomplish their goals.

The La Brea Tar Pits — natural pits of pitch black tar that, over millenniums, have trapped and entombed things that lived in Southern California — sit about eight miles west of the L.A. River.

Fossils found in the tar include everything from saber-tooth cats, giant ground sloths, dire wolves and grizzly bears to plants like oak trees and juniper.

The pits are a far cry from the image of a pristine river. Nevertheless, they’re windows into the life that once flourished in the region, and which may flourish there again.

Jessie George, who recently received her Ph.D. from the University of California, Los Angeles, studies fossil plants at the tar pits. During a tour of the site, she explained that fossils can reveal how past life fared during ancient episodes of climate change. In our age of human-driven climate change, Dr. George explained, that’s critical information for work along the river.

“We have these different windows of different habitats from different times,” said Dr. George as she crouched over the tarred bones of a dire wolf and some juniper seeds. “We can see how they’re responding to climate in real time.”

Juniper, for instance, is native to Southern California. But according to the fossil record, the plant doesn’t fare well in a warming world.

“Juniper is really sensitive to those periods of warming,” said Regan Dunn, a paleobotanist at the tar pits. “We look at those intervals that are hottest, and juniper is having a massive die-off in the Southwest.”

But the fossil record of oak trees — specifically, a type called coast live oak — tells a different story, of resilience through tumultuous times.

“It spans almost the entire record, and has persisted across a wide range of environmental changes,” Dr. George said. “It has faced repeated, short-term warming and cooling events.”

Such information is helpful to Sophie Parker, a scientist with The Nature Conservancy, which alongside California State Parks is leading the effort to enhance the Bowtie parcel. She can use it to determine which plants to turn to as the Bowtie work unfolds.

“We want to select plants that will survive and eventually be self-sufficient and capable of reproducing,” said Dr. Parker, who noted that plants like oaks can create nesting habitats for certain local birds.

“We plan to work with the folks at La Brea to see what sort of overlap there is between our draft plant palette and their list of plants in the paleo record,” Dr. Parker said.

In big and small ways, fossils can shift how we think about the natural world.

Kat Superfisky, left, an urban ecologist with the City of Los Angeles, led a tour of the mostly-concrete L.A. River.Credit…Lucas Van Wyk Joel

“Sometimes, people just want to know if the species is native or not,” said Alexis Mychajliw, a professor at Middlebury College in Vermont who did her postdoctoral research at the tar pits. “That’s one of the most straightforward things the fossil record can be helpful with.”

Coyotes, for instance, roam Southern California, and, according to Dr. Mychajliw, are seen by many as a nuisance.

But there are fossil coyote skulls in the tar pits dating back many thousands of years.

“If you’re seeing it as an intruder, versus seeing it as part of your home landscape, maybe it changes how you interact with the animal,” Dr. Mychajliw said. She added that for urban dwellers in a place like Los Angeles, “it’s really powerful to give people this vision of what their landscape has looked like over time.”

Such fossil data is, in the hands of conservation paleobiologists around the world, adding ancient perspectives to modern conservation problems in a variety of settings.

Fossil data revealed an altered ecosystem at the Colorado River Delta in Mexico where the Colorado River once emptied into the Pacific Ocean before damming. The information helped make the case in 2014 to briefly let the river flow into the delta, for the first time in years.

Shark conservation work in Panama is being informed by the study of fossilized shark scales, which reveal how the cartilaginous fish have responded to human intervention over time.

Back in California, there’s a memorial bust of Mr. MacAdams, the poet, at an entrance to a multiuse path across the L.A. River from the Bowtie parcel.

Mr. MacAdams helped change the narrative surrounding the river, and what constitutes nature, just as scientists studying fossils are doing now. It’s a task Mr. MacAdams passed on to Ms. Superfisky when he died.

“You guys are the next wave of the movement,” she said he told her. 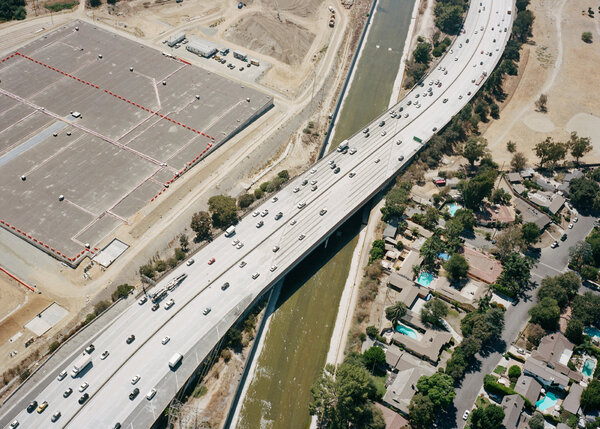 Remaking the River That Remade L.A.

Over the past century it has been channeled, subdued, blighted. Is it time for the Los Angeles River to serve the city in a new way?

Ukrainians Focus on Resilience a Day After Major Russian Strikes

Rikers Has a Deadly Contraband Problem. Are Cargo Pants to Blame?